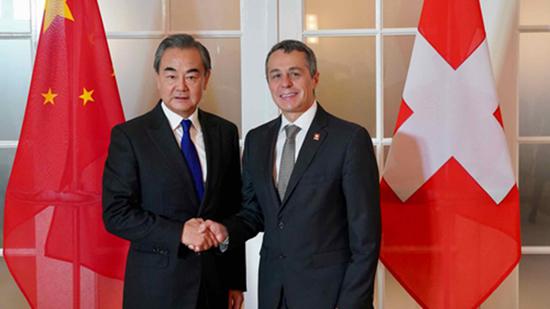 China and Switzerland on Saturday agreed to start negotiations on upgrading a free trade agreement (FTA) between the two countries as soon as possible as the two foreign ministers held talks by phone.

Noting that bilateral trade surged by more than 70 percent from January to September year-on-year despite the COVID-19 pandemic, Chinese State Councilor and Foreign Minister Wang Yi hailed the resilience and vitality of China-Switzerland relations and the role the FTA has played.

The bilateral FTA was signed in Beijing in 2013, and entered into force on July 1, 2014. Since 2010, China has been Switzerland's biggest trading partner in Asia, and its third largest globally after the European Union and the United States.

During the talks, Wang also said the Chinese side stands ready to work with the Swiss side to support the World Health Organization (WHO) in playing its due role and contributing to an equitable distribution of COVID-19 vaccines worldwide, noting the fact that the UN health body is headquartered in Geneva.

He said both China and Switzerland should work together to oppose any attempts to politicize sports in order to build a healthy environment for international events.

The Chinese side appreciates the constructive role Switzerland has played in promoting the political settlement of international disputes, Wang said.

Wang also called on Switzerland to act as a bridge between Eastern and Western civilizations, and developed and developing countries, especially between Europe and China.

For his part, Swiss Federal Councilor and Foreign Minister Ignazio Cassis said his country opposes the politicization of sports and expressed his confidence in a successful Beijing Winter Olympics.

He said Switzerland believes that multilateralism should be more firmly supported and promoted given the increasing geopolitical tensions, and it supports the WHO and other international organizations in playing their due roles.

Cassis also said he regretted he could not travel to China to co-host the third round of China-Switzerland Foreign Ministers' Strategic Dialogue with Wang as scheduled due to technical problems with the aircraft, and hoped for a face-to-face meeting at an early date.

The planned meeting between Cassis and Wang was part of Switzerland's ministerial-level dialogue with China, established in 2017 to strengthen relations between the two countries. The annual meeting between foreign ministers is hosted alternately by Switzerland and China.