-- Chinese President Xi Jinping on Saturday addressed the Group of 20 (G20) leaders' summit via video link, calling on its members to shoulder due responsibilities and uphold openness, inclusiveness and win-win cooperation for forging a community with a shared future for mankind.

-- "Solidarity and cooperation are the most powerful weapons," Xi said, urging the G20 to play a leading role in building consensus, mobilizing resources, and promoting cooperation.

-- "Developed countries need to lead by example on emissions reduction, fully accommodate the special difficulties and concerns of developing countries, and deliver on their commitments of climate financing," Xi added. 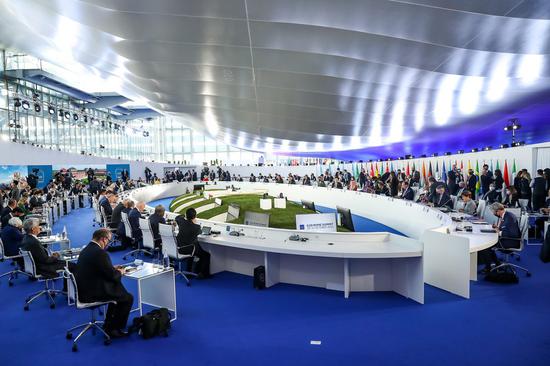 Chinese President Xi Jinping on Saturday addressed the Group of 20 (G20) leaders' summit via video link, calling on its members to shoulder due responsibilities and uphold openness, inclusiveness and win-win cooperation for forging a community with a shared future for mankind.

"Let us work together to dispel the dark clouds of the pandemic at an early date and jointly build an ever better future for all of us," said Xi.

The summit, with the theme of "People, Planet, Prosperity," is being held online and offline from Saturday to Sunday by Italy, which holds the rotating G20 presidency.

"Solidarity and cooperation are the most powerful weapons," Xi said, urging the G20 to play a leading role in building consensus, mobilizing resources, and promoting cooperation.

Created in 1999, the G20 comprising 19 countries plus the European Union, is a main forum for international cooperation on financial and economic issues. The group accounts for 86 percent of the global GDP and two-thirds of the world population. "International expectation is mounting for the G20 to rally more consensus to counter increasingly urgent global challenges," said Liu Zhaoyi, a research fellow at Rhodes University, South Africa.

To actively promote COVID-19 vaccines -- powerful weapons to defeat the virus -- as global public goods, China so far has provided over 1.6 billion doses of vaccines for more than 100 countries and international organizations, and is conducting joint vaccine production with 16 countries, with an initial capacity of 700 million doses per year, as put by Xi.

Proposing a Global Vaccine Cooperation Action Initiative, Xi urged the provision of more vaccines to developing countries to meet the global vaccination target for 2022 as set by the World Health Organization (WHO), encouraging vaccine companies to transfer technology to developing countries, advancing mutual recognition of vaccines in accordance with the WHO's Emergency Use Listing, and providing financial support for global vaccine cooperation.

As developing countries have been hit extraordinarily hard by COVID-19, China has identified the weakest link in the global pandemic response and echoed the latest pledges by G20 members to advance the vaccination drive, said Ruan Zongze, executive vice president of the China Institute of International Studies. "This demonstrates China's resolve to join hands with the world in weathering difficulties as a major player within G20 and beyond."

"China is ready to work with all parties to enhance vaccine accessibility and affordability in developing countries and make a positive contribution to building a global line of defense through vaccination," vowed Xi.

Noting COVID-19 has made a complex and far-reaching impact on the world economy, Xi called for strengthening coordination to promote recovery, urging major economies to adopt responsible macroeconomic policies and the improvement of the global economic governance system and rules.

China welcomes the IMF's decision on the new allocation of Special Drawing Rights totaling 650 billion U.S. dollars, and stands ready to lend the new allocation to low-income countries that are seriously affected by COVID-19, added Xi.

"The governance effectiveness and credibility of the G20 depend on a partnership reflecting the evolving international landscape, meaning the rise of emerging markets," said Sun Jingxin, an associate research fellow with the Academy of Contemporary China and World Studies, adding that China's proposals are aimed at addressing both current economic hazards and the deficit of global governance architecture.

On common development, Xi urged the G20 to prioritize development in macro policy coordination and called on advanced economies to fulfill pledges on official development assistance. He also extended a welcome to more countries to actively participate in the China-proposed Global Development Initiative, which is "highly compatible with the G20's goal and priority of promoting global development."

To tap growth potential via innovation, Xi called on G20 members to promote the deeper integration of digital technologies with the real economy, adding that China has decided to apply to join the Digital Economy Partnership Agreement.

Open and inclusive cooperation championed by China and many other G20 members in the Industry 4.0 era is vital to better economic integration and post-pandemic recovery, Liu Zhaoyi told Xinhua.

As the G20 represents 80 percent of the world's total greenhouse gas emissions, commitments and actions by its members are drawing close attention amid the lead-up to the 26th session of the Conference of the Parties (COP26) to the UN Framework Convention on Climate Change set to open on Sunday, which many G20 members are expected to attend.

Eyeing green and sustainable development, Xi urged the principle of common but differentiated responsibilities for G20 members. "Developed countries need to lead by example on emissions reduction, fully accommodate the special difficulties and concerns of developing countries, and deliver on their commitments of climate financing," Xi added.

John Kirton, founder and co-director of the G20 Research Group under the University of Toronto in Canada, said that China has always led cooperatively with other G20 members in responding to climate change, as demonstrated by its role in facilitating the ratification of the 2015 Paris Agreement. "Such global co-leadership is desperately needed now."

Expounding on China's moves to undertake due international responsibilities commensurate with its national conditions, Xi said in the past 10 years, China phased out 120 million kilowatts of installed coal-fired power generation capacity. The construction of the first batch of wind and photovoltaic power stations with a total installed capacity of about 100 million kilowatts was launched in an orderly fashion, he said.

Bambang Suryono, chairman of Indonesian think tank Asia Innovation Study Center, said China's investment in the new energy vehicle industry in Indonesia will help boost the country's development of green industries, and has provided "valuable inspirations" for other developing countries to avoid the old route of pollution before treatment.

While sticking to its green transition of the growth model and carbon neutrality goals, Suryono said China, "by uniting with other G20 members, could carry the banner of carbon reduction and help rally forces in future global ecological protection."