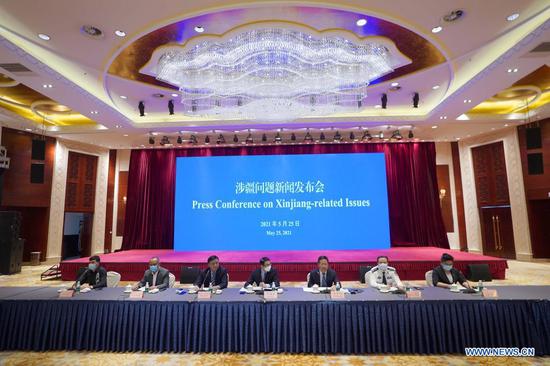 Photo taken on May 25, 2021 shows the press conference on Xinjiang-related issues held in Beijing, capital of China. (Xinhua/Xing Guangli)

A spokesperson of northwest China's Xinjiang Uygur Autonomous Region on Tuesday strongly condemned and rejected the so-called "Uygur tribunal" which attempts to hold a "hearing" on claims of "genocide" in the region.

Spokesperson Xu Guixiang said the "Uygur tribunal" has no legal basis or effect according to relevant international laws and criminal justice practices.

"Any so-called 'verdict' or 'ruling' of the 'tribunal' is nothing more than a piece of waste paper," he said at a press conference held in Beijing.

The "Uygur tribunal," set up by the U.S. and Western anti-China forces in collusion with the "World Uygur Congress" and other "East Turkistan" organizations, is a pseudo-court set up to attack and smear Xinjiang and interfere in China's internal affairs, the spokesperson said.

Xu added that it is simply absurd to see an illegal tribunal holding a "hearing" on the lie of the century.

"This is a serious trampling of international law, a grave desecration of the real 'genocide' victims, and a serious provocation to the 25 million people of all ethnic groups in Xinjiang," he said.