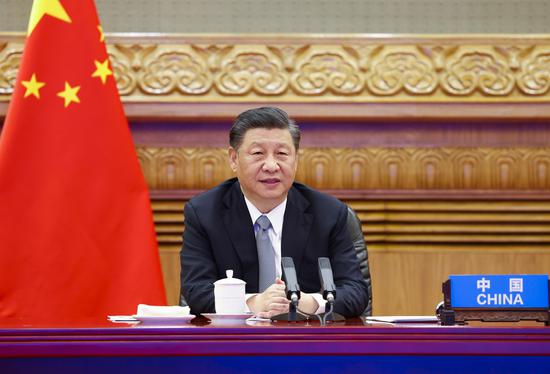 At the invitation of US President Joe Biden, Chinese President Xi Jinping attends the Leaders Summit on Climate via video link and delivers an important speech titled "For Man and Nature: Building a Community of Life Together" in Beijing, April 22, 2021. (Photo/Xinhua)

Through a slew of powerful policy manifestations led by President Xi Jinping over the past month, China has shown its enhanced commitment to and ambition for better tackling climate change and preserving the environment.

In particular, the fresh Chinese policy wisdom for handling thorny environmental problems is epitomized by Xi's recent calling on the world for building a community of life for man and nature.

All these newly unveiled policy ideas mark China's evolving theory, vision and great sense of duty as a major developing country in the post-pandemic era when it seeks justice and equality in the environmental agenda and speaks out for other developing countries, experts and officials said.

The ongoing COVID-19 pandemic has dampened hopes for economic growth across the globe while climate change, biodiversity loss and desertification are worsening.

The United Nations Environment Programme warned late last month that the "three planetary crises" of climate change, biodiversity loss and pollution are reinforcing each other and driving further damage to the environment and to the health of mankind.

Meanwhile, the past 30 days have witnessed a packed schedule of China's engagement in the global agenda regarding environment and climate change.

Then Xi engaged in a video summit on April 16 with French President Emmanuel Macron and German Chancellor Angela Merkel on topics including cooperation in coping with climate change, and he said eliminating greenhouse gases should not be a bargaining chip for geopolitics, a target for attacking other countries or an excuse for trade barriers.

On April 18, Washington and Beijing issued a joint statement on handling climate change.

When delivering a speech via video link at the Leaders Summit on Climate on April 22, Xi proposed the concept of a community of life for man and nature.

Xi called for countries' commitment to six areas: harmony between man and nature, green development, systemic governance, a people-centered approach, multilateralism and the principle of common but differentiated responsibilities.

Xu Huaqing, director-general of the National Center for Climate Change Strategy and International Cooperation, said the six areas Xi named are based on China's successful practices in ecological matters as well as the country's vision in global climate governance, and they constitute a "China solution" for building a global ecological response.

Ronnie Lins, director of the China-Brazil Center for Research and Business, said Xi's speech plays a leading role in the global fight against climate change.

The international community should stick to multilateralism and the principle of common but differentiated responsibility when coping with issues regarding climate change, he told Xinhua News Agency.

On April 30, Xi, who is also general secretary of the Communist Party of China Central Committee, presided over a study session of the Political Bureau of the CPC Central Committee on advancing the building of an ecological response, and he said that economic policy planning must align with the need to peak carbon emissions and pursue sustainable growth.

Xi's comments show that "China not only honors its national strategy of actively dealing with climate change and promoting green development and low-carbon transformation, but it is also consistently helping and supporting other developing countries within its capabilities in these matters," said Wang Jinnan, chief engineer of the Chinese Academy for Environmental Planning.

Yoav Yair, dean of the School of Sustainability at Israel's Interdisciplinary Center Herzliya, said what China has already done to defeat climate change is impressive, given that the country is "looking at all the options available in order to curb carbon emissions, and they're making good progress".

At a recent event in Beijing celebrating China's aid to other countries over 70 years, State Councilor and Foreign Minister Wang Yi said China is committed to helping countries that are receiving assistance to build a resource-saving and environmentally friendly society as well as building a community of life for man and nature.

"When it comes to climate change, the actions of some countries disregard the future of all mankind as they seek their own short-term interests and act mainly out of political considerations," said Su Xiaohui, deputy director of the Department for American Studies at the China Institute of International Studies.

"It will be very difficult to form a joint force if there are no globally recognized ideas for guidance and the direction of joint efforts is not made clear," Su added.

In a broader view of its environmental policy timeline, China, led by Xi, is on course to create a series of fresh, inspiring initiatives for making the planet greener.

In September, Xi first announced that China will strive to peak carbon dioxide emissions before 2030 and achieve carbon neutrality before 2060 when addressing the General Debate of the 75th Session of the UN General Assembly.

At the Climate Ambition Summit in December, Xi announced some further commitments for 2030, such as the goal that China will lower its carbon dioxide emissions per unit of GDP by over 65 percent from the level in 2005.

In October, China will host the 15th Conference of the Parties of the Convention on Biological Diversity in an effort to improve global governance on biodiversity.