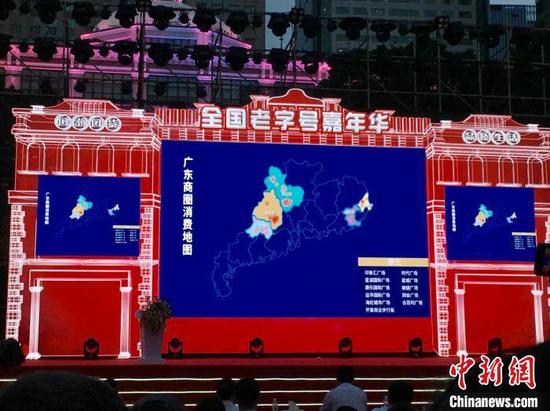 The country's time-honored brands are being spruced up to play a bigger role in further expanding domestic demand in the months ahead.

Liu Decheng, director of the Department of Circulation Development with the Ministry of Commerce, said the improvement and innovation of China's time-honored brands will also help demonstrate China's spirit of craftsmanship and traditional culture.

Liu made the remarks on Wednesday at the launch ceremony of an event to further develop China's time-honored brands and promote domestic sales in Guangdong province's capital Guangzhou, known as a millennium commercial capital.

The 2021 China Time-Honored Brand Carnival that kicked off in the city is an important event to implement the country's strategies to expand domestic demand.

The event will be hosted in tandem with traditional festivals and key exhibitions in major cities and regions in the following months, he said.

"The event will last until the end of the year and will help promote the innovation and development of China's time-honored brands online and offline," Liu added.

Chen Zhiying, executive vice-mayor of Guangzhou, said the city has enjoyed a reputation as a major commercial city and a trading port for centuries.

And a large number of well-known time-honored brands with strong Lingnan (South China) cultural characteristics have been bred, developed and inherited in the southern metropolis, he said.

"Now Guangzhou has a total of 133 time-honored brands registered from more than 20 industries, including accommodation and catering, retail, medicine, arts and crafts as well as food processing," Chen said.

He pledged that his government would continue to spare no efforts in cultivating local brands and further innovate and develop its time-honored brands while trying to build the city into an international consumption center.

According to sources with Guangzhou's commerce bureau, a series of policies and measures have been introduced to help promote and innovate the city's time-honored brands in the future.

In addition to promotional events, the bureau is now speeding up the integrated development of time-honored brands with culture and tourism industries.

Meanwhile, the bureau urges and encourages more time-honored companies to increase their presence at home and abroad in the years ahead.

The event aims to further promote the inheritance, innovation and development of the country's time-honored brands and carry forward traditional Chinese culture.

It is organized by the Guangzhou government and the Guangdong Provincial Department of Commerce.

Wen Guohui, mayor of Guangzhou, joined other senior officials from the Ministry of Commerce, Guangdong and the Guangzhou government, to attend the event which was organized on Beijing Lu, a well-known pedestrian commercial street in the southern metropolis.

Located in the provincial capital's Yuexiu district, the thoroughfare has now attracted plenty of time-honored brands' products from home and abroad.