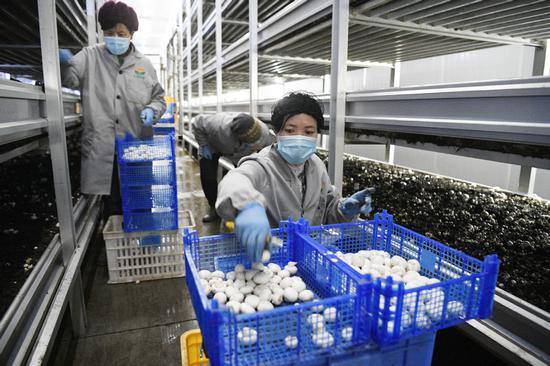 Workers harvest mushrooms in March last year at a cultivation base in Minning, a town in the Ningxia Hui autonomous region. Minning, located in a desert area, has greatly developed economically since Ningxia established pairing-off poverty-alleviation cooperation with Fujian province in 1996, when President Xi Jinping was deputy Party secretary of Fujian. (WANG PENG/XINHUA)

President Xi Jinping has urged steps to optimize the practice of eastern and western provincial areas pairing off to help each other in order to carry forward the momentum of poverty elimination, accelerate the modernization of agriculture and rural areas and promote rural vitalization.

In an instruction published on Thursday, Xi highlighted the need to adapt the program of East-West Pairing-off Cooperation for Poverty Reduction, whereby a developed province in the east assists a less-developed region in the west, to the new situation and circumstances.

The program, together with central departments offering assistance to designated poverty-stricken areas, is a major decision by the Communist Party of China Central Committee to promote the coordinated growth between regions and common prosperity, said Xi, who is also general secretary of the CPC Central Committee.

He called for steps to focus on consolidating the outcomes of poverty reduction and pushing forward rural vitalization across the board with the furthering of the two programs.

Xi announced at a grand gathering in Beijing in February that China has secured victory in its fight against absolute poverty in rural areas, having lifted nearly 100 million people out of extreme material deprivation and ensured that poverty is eliminated in all poor counties and regions.

As the nation moves forward to vitalize rural areas, Xi said in the instruction that it is important to expand the area of pairing-off cooperation, refine the mechanisms and means, boost cooperation in industries and enable better alignment in resources, labor and talent.

The goal is to work toward more coordinated development and joint growth between different regions, he said.

He urged central departments undertaking the task of offering assistance to designated areas to carry out their duties, amplify their own strengths, innovate their aid measures, spur the implementation of policies and improve the efficacy of assistance measures.

The instruction came as a national conference to advance the two programs was held on Thursday in Yinchuan, capital of the Ningxia Hui autonomous region.

Vice-Premier Hu Chunhua said at the meeting that more work must be done to explore new models in pairing-off cooperation between eastern and western provincial areas and to promote the transfer of industries.

While serving as a provincial leader in Fujian province in the late 1990s, Xi personally oversaw the progress of pairing-off cooperation between Fujian and Ningxia. One of the landmark programs from the cooperation was the development of Minning township and a slew of support industries that increased the per capita disposable income of residents to 14,900 yuan ($2,275) last year from 500 yuan in 1997.

Yu Lerong, an associate professor of rural development at China Agricultural University, said Xi has reaffirmed the important role of the two programs for China in winning the fight against rural poverty and pointed the way for them to continue to aid the nation's rural vitalization drive.

"It is important for the nation to amplify the role of the two programs, which have distinctive Chinese characteristics, so as to narrow the divide between regions and pave the way for common prosperity," she said.