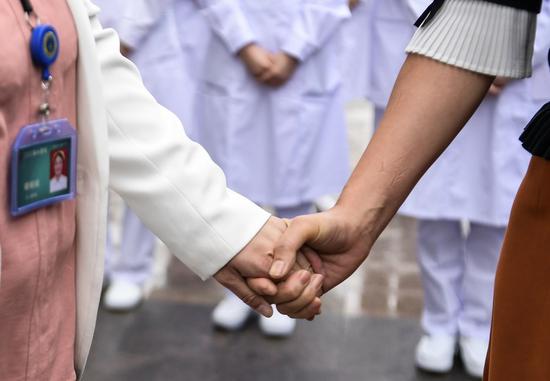 Cai Weimin (R), a former member of the medical team supporting Wuhan from Beijing Hospital of Traditional Chinese Medicine, holds the hand of Hu Juanjuan, head nurse of the west campus of the Union Hospital in Wuhan, central China's Hubei Province, Sept. 23, 2020. A dozen of medical workers from Beijing, who had been in Wuhan to support the fight against the COVID-19 epidemic, revisited Wuhan and reunited with their colleagues there after nearly six months. (Xinhua/Li He)

A Chinese envoy on Monday, which coincides with the International Women's Day, told the world that women in China truly "hold up half the sky."

"Women hold up half the sky. It is so true in China," Zhang Jun, China's permanent representative to the United Nations, said in his message for the international day.

"In pandemic response, women are on the front lines. More than 40,000 health workers from across China rushed to Hubei Province, and two-thirds of them were women," said the ambassador.

Speaking about UN peacekeeping, the envoy said that more than 1,000 Chinese women have served as the Blue Helmets in the Democratic Republic of the Congo, South Sudan, Mali, Haiti and other field missions.

The theme of this year's International Women's Day is "Women in leadership: Achieving an equal future in a COVID-19 world." The theme celebrates the tremendous efforts by women and girls around the world in shaping a more equal future and recovery from the COVID-19 pandemic.