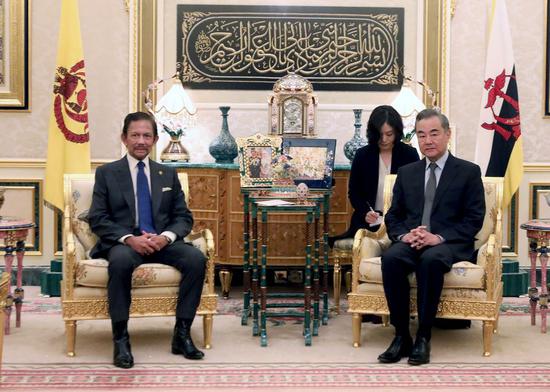 Since the outbreak of the COVID-19 pandemic, both countries have joined hands in fighting the virus and deepened mutual trust and friendship, demonstrating the real nature of the bilateral strategic cooperative partnership, Wang said.

He noted that as both countries celebrate the 30th anniversary of diplomatic relations this year, bilateral ties have reached a new historic point. He called on both sides to fully implement the consensus reached by leaders of the two countries and align China's Long-Range Objectives Through the Year 2035 with Brunei's national vision, the Wawasan 2035, so as to promote bilateral cooperation in all areas to a new level.

Wang pledged to carry on joint fight against the pandemic and build the "fast tracks" for personnel movement and discuss the building of "green lanes" for goods movement.

He called on both sides to speed up cooperation projects such as Hengyi Industries Sdn Bhd's oil refinery and petrochemical project and Brunei-Guangxi Economic Corridor, push forward cooperation in agriculture and fishery, create new growth opportunities in sectors of 5G, big data and cloud computing so as to contribute to Brunei's economic diversification drive.

Wang said China supports Brunei in taking over as the rotating chair of the Association of Southeast Asian Nations (ASEAN), will take the chance of the 30th anniversary of the China-ASEAN dialogue relations to elevate the China-ASEAN relations, build blue economy partnership consensus and put into effect the Regional Comprehensive Economic Partnership at an early date.

China has always appreciated and supported the dual-track approach proposed by Brunei in addressing the maritime issue, and wish to strengthen cooperation and solidarity with all ASEAN countries and properly manage disputes, so as to ensure that the South China Sea is a peaceful and stable sea, he said.

Hassanal, for his part, said China is Brunei's traditional, friendly neighbor and important cooperation partner, and the relations between the two countries are established on the basis of mutual trust, mutual respect, mutual benefit and win-win.

Expressing gratitude to China for its valuable support to Brunei in fighting the COVID-19 pandemic, Hassanal congratulated China on successful research and development of COVID-19 vaccines, and hoped to conduct cooperation with China in the field of vaccines so as to provide guarantee for the people to people exchanges and the cooperation in all fields between the two countries.

Hassanal said his country firmly adheres to the one-China principle and stands ready to dovetail its national vision Wawasan 2035 with China's Long-Range Objectives Through the Year of 2035 on the occasion of the 30th anniversary of the establishment of the diplomatic relations between the two countries, boost cooperation with China in the sectors of agriculture and fishery, press forward the construction of important projects including Hengyi Industries Sdn Bhd's oil refinery and petrochemical project and the Brunei-Guangxi Economic Corridor as well as deepen the strategic cooperative partnership between the two countries.

He said Brunei, which holds the rotating chair of the Association of Southeast Asian Nations (ASEAN) this year, is willing to play its role in promoting mutual trust and cooperation between ASEAN and China and maintain regional peace and stability.

On the same day, Wang Yi also held talks with Haji Erywan, Brunei's Second Minister of Foreign Affairs and Haji Mohd Amin Liew, Minister at the Prime Minister's Office and Second Minister of Finance and Economy, and co-chaired the second meeting of the China-Brunei intergovernmental joint steering committee. Wang Yi also attended the logo launching ceremony for the 30th anniversary of the establishment of diplomatic relations between China and Brunei, and met with ASEAN Secretary-General Lim Jock Hoi.