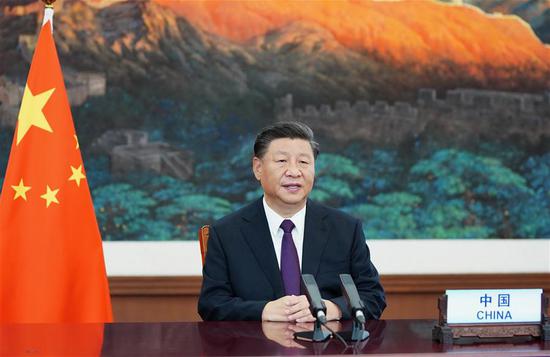 Chinese President Xi Jinping addresses a high-level meeting to commemorate the 75th anniversary of the United Nations via video on Sept. 21, 2020. (Xinhua/Ju Peng)

Chinese President Xi Jinping on Monday shared his thoughts on the role of the United Nations (UN) in the post-COVID era, opposing unilateralism, bullying or any country acting like "boss of the world."

Xi made the comments at a high-level meeting to commemorate the 75th anniversary of the UN.

Stressing that the UN must stand firm for justice, Xi said no country has the right to dominate global affairs, control the destiny of others, or keep advantages in development all to itself.

"Even less should one be allowed to do whatever it likes and be the hegemon, bully or boss of the world," Xi said.

He said it is imperative that the representation and voice of developing countries be increased so that the UN could be more balanced in reflecting the interests and wishes of the majority of countries in the world.

Stressing that the UN must uphold the rule of law, Xi said relations among countries and coordination of their interests must only be based on rules and institutions.

"They must not be lorded over by those who wave a strong fist at others," Xi said.

Big countries should lead by example in advocating and upholding the international rule of law and in honoring their commitments, he added.

"There must be no practice of exceptionalism or double standards. Nor should international law be distorted and used as a pretext to undermine other countries' legitimate rights and interests or world peace and stability," Xi said.

The Chinese president said the UN must promote cooperation, noting that "Cold War mentality, ideological lines or zero-sum game are no solution to a country's own problems, still less an answer to mankind's common challenges."

"What we need to do is to replace conflict with dialogue, coercion with consultation and zero-sum with win-win," he added.

The Chinese president also said that the UN must focus on real action.

"To put into practice the principle of multilateralism, we must act, not just talk," Xi said. "There must be a cure, not just a therapy."

The UN should aim at problem solving and move toward tangible outcomes as it advances security, development and human rights in parallel, he added.

In particular, he said priority should be given to addressing non-traditional security challenges such as public health.

At the meeting, Xi lauded UN's role in 75 years, saying the organization has traveled an extraordinary journey.

He said the 75 years has seen dramatic progress in human society and profound changes in the international situation, and has been a period of rapid development of multilateralism.

"Let us renew our firm commitment to multilateralism, work to promote a community with a shared future for mankind," Xi said before concluding his remarks.