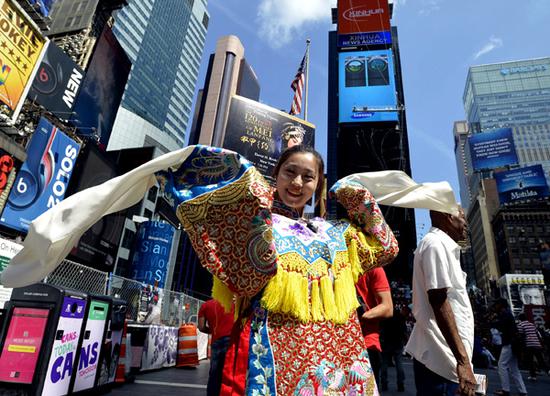 An artist promotes Peking Opera at Times Square in New York City. China's national image in the international community has continued to improve in recent years, according to a report released in Beijing on Sept 15. (WANG LEI/XINHUA)

China's national image in the international community has continued to improve in recent years, according to a report released in Beijing on Tuesday.

China scored 6.3 in a 10-point system concerning its overall image in 2019, 0.1 point higher than in 2018, said a report released jointly by the Academy of Contemporary China and World Studies, a think tank affiliated with China Foreign Languages Publishing Administration, and Kantar Group, a consulting company.

The report said respondents from developing countries generally have a better impression of China's image, rising from 5.8 points in 2013 to 7.2 points last year.

The 2019 report was based on an online survey conducted between June and September 2019 among 11,000 residents in 22 countries, including Japan, South Korea, India, the United Kingdom, France, Germany, the United States, Canada, Brazil, Australia and South Africa, said Yu Yunquan, director of the academy. This is the seventh time that the report has been released.

The survey found that the respondents paid great attention to China's participation in global governance, particularly in three fields: science and technology, economy and culture. It also found they expected China to play a bigger role in the first two fields in the future.

Sixty-eight percent of the people polled believed that China has strong abilities in innovation in science and technology, with high-speed trains being the country's best-known technological achievement, followed by supercomputers (24 percent) and manned space technology (23 percent).

The survey also found 56 percent of the people polled said they see China as "a major oriental country with a rich history and full of charm", and almost half of the respondents considered China "a contributor to global development".

Cheng Manli, director of the Research Institute of National Strategy Communication at Peking University, said although the survey was conducted before the COVID-19 outbreak, China's role as a contributor to global development has been consistent and could be seen during the pandemic.

Gao Anming, deputy head of the China Foreign Languages Publishing Administration, said that while exposing overall deficiencies in global governance, the COVID-19 pandemic has also raised a question for nations on how to build and transmit their national images.

China should be fully aware of its image, encourage professional institutions to carry out surveys and make national image part of the cooperation between think tanks inside and outside of China, he said.

The report said 31 percent of the respondents said that China should focus on building its image as a global development contributor in the next five to 10 years, while 27 percent said they expect China to display its image as a country with a rich history in the East and 25 percent hoped to see China rise as a responsible major country.