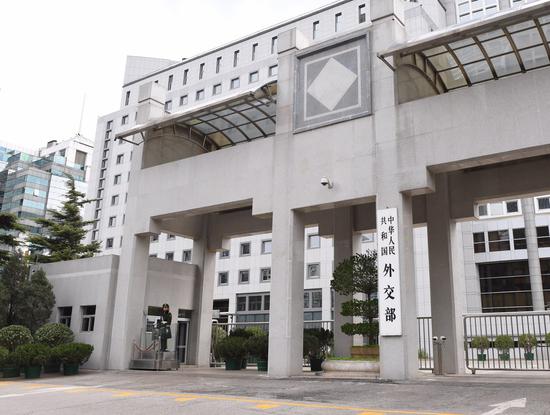 File photo shows the Ministry of Foreign Affairs of the People's Republic of China in Beijing, capital of China. (Xinhua/Li He)

A Foreign Ministry spokesperson said Thursday that the overall situation at the China-India boundary is stable and ameliorating, expressing the hope that both sides will work towards the same goal to implement consensus that have been reached with concrete actions and de-escalate tensions in the border region.

When making remarks at a press briefing about the latest situation on the China-India border, spokesperson Zhao Lijian said the Chinese and India border troops have been taking effective measures to disengage at Galwan Valley and other areas in the western sector, following the consensus reached at the corps commander-level talks.

"The overall situation at the China-India boundary is stable and ameliorating," Zhao said.

He added that the two sides will continue to maintain dialogue and communication through military and diplomatic channels, including holding a new round of corps commander-level talks and the meeting of the Working Mechanism for Consultation and Coordination on China-India Border Affairs.

"We hope India will work with China towards the same goal to implement consensus reached between the two sides with concrete actions and jointly de-escalate tensions in the border region," Zhao said.