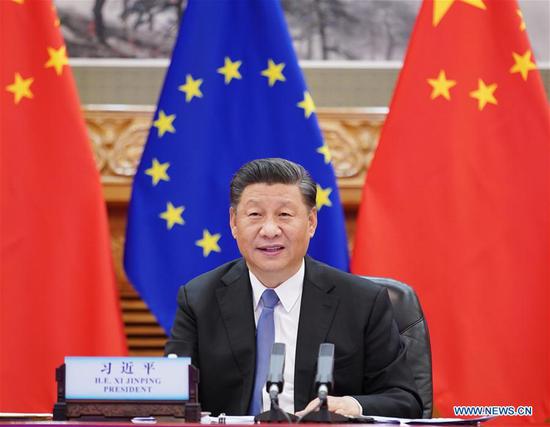 The COVID-19 pandemic may have pressed the "pause" button on interaction between countries, but China's diplomacy led by President Xi Jinping, in the form of phone calls, correspondence and videoconferences, has helped to further enhance the country's relations with the rest of the world amid the pandemic, officials and experts said.

The intensive interactions between Xi and other world leaders in the first half of this year have contributed to jointly working out ways to effectively respond to the public health crisis and offset the impact of the pandemic on the world economy, they said.

Since the start of the outbreak, Xi has engaged with more than 50 foreign leaders and heads of international organizations through phone calls and meetings, and advanced international cooperation in fighting the novel coronavirus. On June 22, he met with the European Union's new leadership－European Council President Charles Michel and European Commission President Ursula von der Leyen－via video link to strengthen China-EU cooperation.

He also attended a series of virtual multilateral events, including the Extraordinary G20 Leaders' Summit and the opening of the 73rd World Health Assembly, and hosted the Extraordinary China-Africa Summit on Solidarity Against COVID-19 via video link.

In addition, Xi sent letters to foreign leaders to extend his sympathy to the people of epidemic-affected countries, express China's support to them for their efforts in curbing the virus and strengthen bilateral ties.

Speaking at a news conference on the sidelines of the annual session of the National People's Congress, the nation's top legislature, on May 24, State Councilor and Foreign Minister Wang Yi said that in all of Xi's diplomatic engagements in what was called "cloud diplomacy", in the form of phone calls, correspondence and video conferences, the president underscored China's unequivocal commitment to global solidarity and cooperation against COVID-19.

More than 170 foreign leaders, 50-plus heads of international and regional organizations and more than 300 political parties or organizations have expressed their sympathy over the outbreak and their support for China's efforts to curb the virus through phone calls, letters or making statements, the Foreign Ministry said.

China has also provided aid in medical supplies and expertise to other countries while sharing information and anti-epidemic experience with them. By the end of May, China had exported anti-epidemic materials such as masks and protective clothing to over 200 countries and regions, the ministry said.

Vice-Foreign Minister Ma Zhaoxu said at a news conference last month that China's relations with the majority of countries have been improved and strengthened amid the epidemic and its circle of friends has been expanded.

Addressing the Extraordinary G20 Leaders' Summit, Xi called on the international community to be resolute in fighting a global war against COVID-19, make a collective response for control and treatment at the international level, leverage and coordinate international macro policies to counteract the negative impact of the contagion and prevent the world economy from falling into recession.

In a written message to the China-Arab States Political Parties Dialogue Extraordinary Meeting held via video link last week, Syrian President Bashar al-Assad, who is also the general secretary of the Ba'ath Party in Syria, praised China's active efforts in upholding cooperation with the international community in the fight against the disease.

He said that China has played a significant role in responding to the pandemic, and he expressed hope that China will play a bigger role in the field of international politics.

Xi announced at the opening of the 73rd World Health Assembly that China will provide $2 billion over two years to help with COVID-19 response and with economic and social development in affected countries. He said that a COVID-19 vaccine developed in China, when available, will be made a global public good.

While hosting the Extraordinary China-Africa Summit on Solidarity Against COVID-19 on June 17, Xi announced an array of measures to support African countries in curbing the epidemic and promoting socioeconomic development, including cancellation of the debt of relevant African countries in the form of interest-free government loans that are due to mature by the end of 2020 within the framework of the Forum on China-Africa Cooperation.

Matteo Giovannini, a finance professional at the Industrial and Commercial Bank of China in Beijing and a member of the China Task Force at the Italian Ministry of Economic Development, said that China's decision represents an act of generosity toward countries facing a difficult time by voluntarily deciding to cancel part of the pending debt.

"China is showing real economic responsibility through actions that speak much louder than other nations' words in the past, and by doing this it is demonstrating that the country is ready to assume a prominent role at a time when global leadership is more than needed," Giovannini said in an opinion piece published on the website of the China Global Television Network.

Ruan Zongze, executive vice-president of the China Institute of International Studies, said "cloud diplomacy" was developed at a time when the pandemic dramatically affected diplomatic activities due to travel restrictions, but through it, China has enhanced understanding and support with the rest of the world during such a trying time.