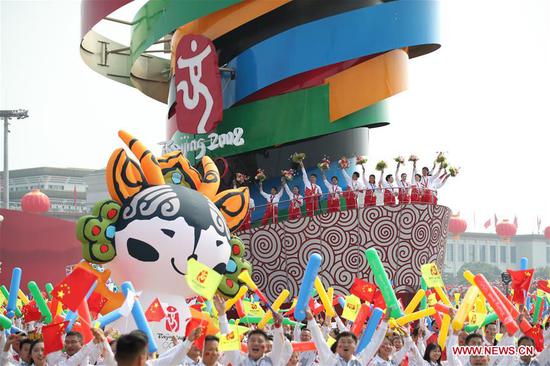 A formation highlighting the 2008 Beijing Olympics takes part in a mass pageantry during the celebrations marking the 70th anniversary of the founding of the People's Republic of China (PRC) in Beijing, capital of China, Oct. 1, 2019. (Xinhua/Meng Yongmin)

The third part of a mass pageantry celebrating the 70th anniversary of the founding of the People's Republic of China highlighted the Chinese nation's great rejuvenation with 18 formations marching through the Tian'anmen Square in central Beijing Tuesday.

At the center of the leading formation was a giant portrait of Xi Jinping.

Since the 18th Communist Party of China (CPC) National Congress, the CPC Central Committee with Comrade Xi Jinping at the core has led all Party members and the Chinese people of all ethnic groups in a concerted effort to carry out a great struggle, develop a great project, advance a great cause and realize a great dream, established Xi Jinping Thought on Socialism with Chinese Characteristics for a New Era, and pushed for historic achievements and shifts in the cause of the Party and the country, said an official narrator of the pageantry.

"Socialism with Chinese characteristics has entered a new era. The Chinese nation has made a great leap from standing up to growing rich and to becoming strong," said the narrator.

A float in the shape of a Chinese mythical giant bird Kunpeng drove by, showing the soaring momentum of the Chinese nation. Floats representing the country's provinces, autonomous regions, municipalities, Hong Kong, Macao and Taiwan followed.

Then came a formation underscoring a community with a shared future for humanity, which featured Chinese and foreign youth joining hands. The formation also highlighted the Belt and Road Initiative.

The next formation demonstrated the CPC's sweeping victory in the fight against corruption, highlighting remarkable outcomes in full and strict governance over the Party.