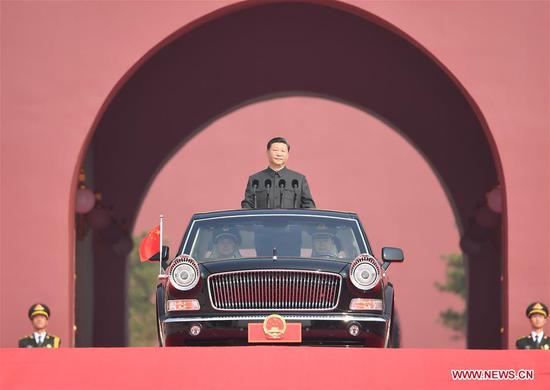 Chinese President Xi Jinping, also general secretary of the Communist Party of China (CPC) Central Committee and chairman of the Central Military Commission, is ready for a National Day review of the armed forces as a limousine carrying him drives out of the Tian'anmen Rostrum during the celebrations for the 70th anniversary of the founding of the People's Republic of China in Beijing, capital of China, Oct. 1, 2019. (Xinhua/Yan Yan)

Chinese President Xi Jinping reviewed the armed forces at the heart of Beijing Tuesday morning, his first on National Day, to mark the 70th founding anniversary of the People's Republic of China (PRC).

Wearing a high-collar dark grey Chinese-style suit, Xi repeated salutes through microphone: "Salute to you, comrades!" and "Comrades, thanks for your hard work!" The soldiers replied: "Hail to you, Chairman!" and "Serve the people!"

Thousands of servicemen and women goose-stepped through the square, sophisticated tanks and armoured vehicles rumbled and up-to-date fighters flew by. The historic parade consisted of 15,000 personnel, 580 pieces of armament and more than 160 aircraft in 15 foot formations, 32 armament formations and 12 echelons.

The National Day parade was the first of its kind since socialism with Chinese characteristics entered a new era and the first overall demonstration of Chinese armed forces after their comprehensive reform and restructuring in recent years.

"Seventy years ago on this day, Comrade Mao Zedong solemnly declared here to the world that the PRC was founded. The Chinese people have stood up," Xi said on Tian'anmen Rostrum when addressing a grand rally. "The Chinese nation has since then embarked on the path of realizing national rejuvenation."

Unlike the National Day parade 70 years ago in which many weapons of the People's Liberation Army (PLA) were foreign produced ones seized from rival troops in the battlefield, all armaments in the parade now are home made.

A large part of ground formations and echelons were formed by multiple services, a structure highlighting an enhanced inter-operability of the PLA achieved through the reform.

Among several formations first appearing in a National Day parade was China's peacekeeping forces as the country remained the largest contributor of peacekeepers among the five permanent members of the UN Security Council. Currently 2,500 Chinese soldiers and officers are serving in seven peacekeeping missions across the world.

Since reform and opening up in 1978, China has cut its armed forces by over 4 million.

"We have presented a refreshed image after reform and restructuring," said Yi Xiaoguang, commander-in-chief of the military parade. "Chinese armed forces will always be a defender of the people and national security of China and world peace."

Since he assumed CMC Chairman, Xi has reviewed the armed forces several times, including one in Tian'anmen Square in 2015 marking the 70th anniversary of the end of World War II, one at the heartland of Inner Mongolia in 2017, and two off the coast aboard warships in 2018 and 2019, keenly aware of the necessity of building a strong military for the sake of preventing wars and sustaining peace.

"China will stay on the path of peaceful development," Xi said in his National Day speech. "We will continue to work with people from all countries to push for jointly building a community with a shared future for humanity." (Updated)