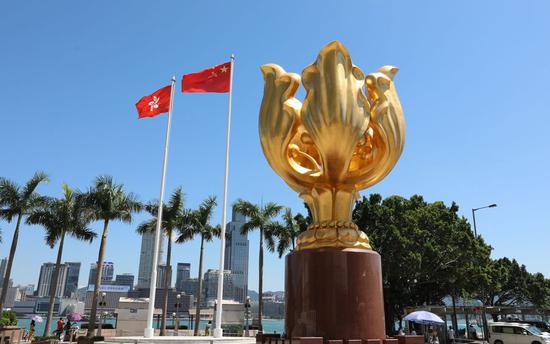 Lau Yip-shing, deputy commissioner of police of the Hong Kong Police Force, has called the attempt to smear the Hong Kong police as "dirty cops" as the biggest conspiracy and lie in the world.

In an internal letter to the police dated Sept. 19, Lau said since his return to the police force in August, he faced a society full of hatred, rift and instability with his colleagues every day, and together they handled the worst and most unruly riots in Hong Kong's history.

"The past six weeks have been one of the hardest, most worrying, but most glorious days of my life," Lau said.

Ill-intentioned people continued to spread rumors and distort facts, with an aim to discredit the police, undermine the good relationship between Hong Kong residents and the police, and incite hatred for more riots in the society, which in turn damaged the governance and security in Hong Kong, he said.

"There is no 'dirty cops'. It's a false accusation," Lau said, adding that Hong Kong's most pressing need is to put an end to chaos and root out all unrest and hatred.

Lau thanked the 30,000 police officers for their efforts to maintain social order in Hong Kong, and hoped the force could keep the morale and eradicate the roots of hatred and riots, and restore peace in Hong Kong.

Lau started his pre-retirement leave at the end of last year. He returned to the police force on Aug. 9 and took up a temporary post of deputy commissioner of police, whose main duties include dealing with protests.