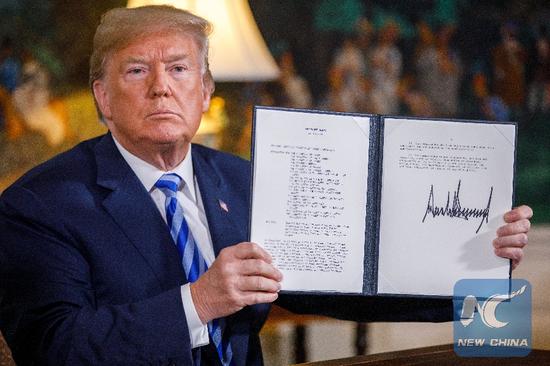 File Photo: U.S. President Donald Trump signs a memorandum declaring his intention to withdraw from Iranian nuke deal at the White House in Washington D.C., the U.S., on May 8, 2018. (Xinhua/Ting Shen)

The U.S. Department of the Treasury announced Thursday that the United States had imposed sanctions against two Syria-based, Iran-backed militias and two aviation entities linked to Iranian airline Mahan Air.

The Treasury accused that the fighters of the two Syria-based militias, mostly Afghan and Pakistani refugees and migrants residing in Iran, are recruited by Iran's Islamic Revolution Guards Corps (IRGC).

The Treasury also targeted Qeshm Fars Air and an Armenia-based Flight Travel LLC. The United States believes the two entities have a close connection with the designated Iranian airline Mahan Air, which supports the Quds Forces of the IRGC and its proxies in Syria by transporting personnel and weapons.

"Treasury's targeting of Iran-backed militias and other foreign proxies is part of our ongoing pressure campaign to shut down the illicit networks the regime uses to export terrorism and unrest across the globe," Treasury Secretary Steven Mnuchin said in a statement.

According to the statement, all property and interests in property of these entities that are in the United States or in the possession or control of Americans are blocked, and Americans are generally prohibited from engaging in transactions with them.

Washington has reimposed comprehensive sanctions against Tehran since U.S. withdrawal from the 2015 Iranian nuclear deal last May, seeking to curtail "Iran's malign influence across the region. "

In an international conference held in Tehran last December, Iranian President Hassan Rouhani criticized the U.S. moves to exert sanctions on Iran as the "economic terrorism."

"We are here to voice that if the United States thinks that it can divide us, then it is making a grave mistake," Rouhani stressed.