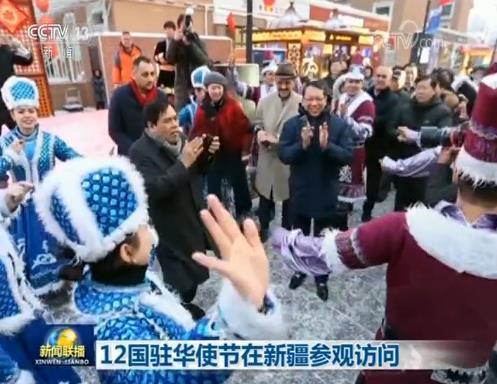 Diplomatic envoys from 12 countries witnessed the social and economic progress in northwest China's Xinjiang Uygur Autonomous Region on a tour from Dec. 28 to 30 in 2018.

Throughout the trip, they interacted with local vendors, students, and workers in Xinjiang and learned about the region's progress in maintaining social stability, improving people's livelihood and developing local economy. They said they expected to cooperate with China's Xinjiang in the fields of culture, tourism, economy and trade.

At the Grand Bazaar in the regional capital Urumqi, Mumtaz Zahra Baloch, Charge d'Affaires of the Pakistani Embassy in China, said Xinjiang's cultural vitality and people's hospitality had impressed her deeply.

A Pakistani businessman at the Bazaar told Baloch that he married a local Uygur woman and is happy with his life and work in Urumqi.

At the Xinjiang Islamic Institute, which offers three-year bachelor programs and religious training, Ambassador of Kuwait to China Sameeh Johar Hayat encouraged the students to learn more and contribute what they learn to the development of their country.

Upon seeing the wide variety of imported products from Europe, Central Asia, and Southeast Asia in the zone, Piriya Khempon, ambassador of Thailand to China, said the trip had deepened his understanding of the Belt and Road Initiative, which he said is very important to Kashgar's development.

Khempon said he believed the city is bound to become a lot better in the coming years thanks to its geographical advantage.

The diplomatic envoys also visited Id Kah Mosque in Kashgar, the largest mosque in Xinjiang, and were briefed on the mosque and its facility improvements.

Mohammed Hosnie Shahiran Ismail, Counselor of the Malaysian Embassy in China, said, through the tour, he sees that the Chinese government attaches great importance to religious freedom, and religious activities are protected by the state.

The trip refreshed his understanding of Xinjiang, he said, adding the region is different from what Western media has portrayed.

At a vocational education and training center in Kashgar, students study ethnic instruments, calligraphy, painting, law, and many other skills.

The envoys asked in detail about the students' life in the center and played ping pong and basketball with them.

Ambassador of Indonesia to China Djauhari Oratmangun said the school had left a great impression on him and that students learn not only about law and skills, but also their own culture.

At another vocational training center in Hotan, Kabaziyev Manarbek, Counselor of the Kazakhstan Embassy in China, received an oil painting created by a student who has studied art for half a year in the center, as a New Year gift.

Manarbek said students master vocational skills here through training and make a living with these skills later in life; it shows that the Chinese government truly cares about these trainees.

The envoys also visited a clothing factory in Hotan, where villagers who have received training work on the assembly lines. According to the factory owner, they receive a monthly salary of more than 3,000 yuan (438 U.S. dollars).

People are busy studying and working here, very different from the past when people were often seen idling around without much to do, said Sayed Habiburahman Husinpur, Charge d'Affaires of the Afghanistan Embassy in China who has visited Xinjiang many times.

The vocational education and training program is a suitable arrangement that has improved the lives of many people as well as their families, Husinpur said. Many countries face issues such as "solving unemployment and de-extremism," but the programs in Xinjiang are reaping good results and can provide reference for other countries.