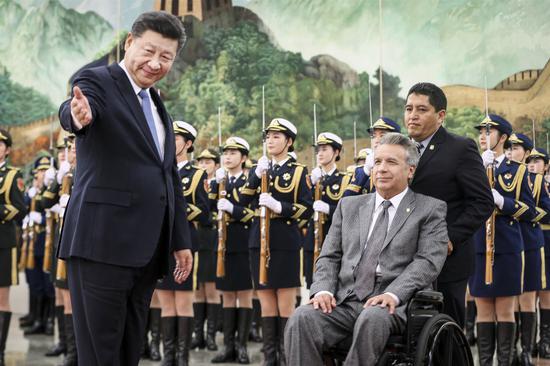 President Xi Jinping hosts Ecuadorian President Lenin Moreno during a welcoming ceremony at the Great Hall of the People in Beijing on Wednesday. Moreno began a three-day visit to China on Tuesday. [Photo by Wu Zhiyi/China Daily]

China and Ecuador signed on Wednesday a cooperative document on jointly building the Belt and Road, drawing the two countries into a closer relationship.

The signing was witnessed by President Xi Jinping and his Ecuadorian counterpart, Lenin Moreno, during Moreno's three-day visit to China, which started on Tuesday.

More than 140 cooperative agreements on the joint construction of the Belt and Road have been signed between China and other countries or international organizations.

During the meeting with Moreno, Xi said China welcomes Ecuador to participate in building the Belt and Road and jointly promote cooperation in such areas as industrial capacity, agriculture, information technology and new energy.

Ecuador is welcome in the Chinese market and to share the opportunities provided by China's development, Xi said. He said China never attaches any political strings to its financial cooperation with the Latin American country.

While the Chinese government asks Chinese enterprises to abide by local laws and regulations when doing business in Ecuador, it also hopes their legitimate rights and interests will be protected, Xi said.

He praised Moreno for his dedication to deepening the friendly cooperation between the two countries since he took office.

Promoting the healthy and stable development of bilateral ties is in line with the fundamental interests of both countries and their people, it also conforms to the trend of times, featuring peace, development, cooperation and win-win results, Xi said.

Xi called on both countries to have more frequent high-level exchanges, strengthen strategic coordination, share experience in governing a state, promote understanding and support for each other's development path, and firmly support each other on issues concerning core interests and major concerns.

China and Ecuador have the same or similar positions on major international and regional issues, Xi said, urging the two countries to jointly maintain multilateralism, promote the reform of the global governance system and safeguard the legitimate rights and interests of developing countries.

Moreno said the Belt and Road is an important international public contribution from China and connects the two countries in a closer manner.

Ecuador welcomes and thanks China's financial support as it bears significance for promoting the country's infrastructure construction, he said.

His country hopes to expand exports to China, host the China-Latin America business summit and make exchanges with China in the field of scientific and technological innovation, he added.