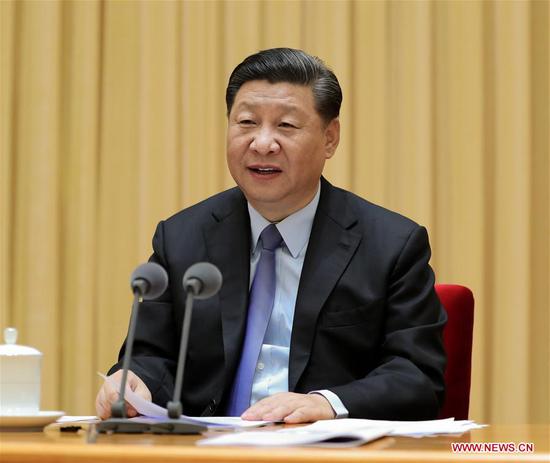 President Xi Jinping, also general secretary of the Communist Party of China Central Committee and chairman of the Central Military Commission, speaks at a national education conference in Beijing, capital of China, on Sept. 10, 2018. (Photo/Xinhua)

President Xi Jinping reiterated his unwavering commitment to the private sector on Saturday and lauded efforts by entrepreneurs to participate in the fight against poverty.

Xi, also general secretary of the Communist Party of China Central Committee, made the remark in a letter to entrepreneurs taking part in the poverty alleviation campaign, in which private businesses are encouraged to extend a helping hand to thousands of economically struggling villages.

It has been the consistent and unwavering policy of the CPC Central Committee to support the development of the private sector, Xi said.

He said he is pleased to see an increasing number of private businesses proactively assume their social responsibility in devoting themselves to the battle against poverty and helping many poor people live better lives.

The targeted poverty alleviation campaign, jointly organized by the State Council Leading Group Office of Poverty Alleviation and Development and the All-China Federation of Industry and Commerce beginning in 2015, has so far seen the participation of over 60,000 private businesses.

Forty years on since the country's reform and opening-up, private businesses are blossoming, and the private sector has grown bigger and stronger, Xi said.

The sector has played an important role in stabilizing growth, promoting innovation, adding jobs and improving livelihoods, he added.

Xi said he hopes entrepreneurs seize the overarching trend of the times, shore up confidence for growth and stay focused on innovations and creativity.

This is the second time Xi has voiced his support for the private sector recently.

During a four-day inspection to Northeast China in late September, Xi said the country will continue to create a good legal environment and further refine the business climate for private businesses.

China will unwaveringly develop the public sector, and ceaselessly encourage, support, guide and protect the growth of the private sector, he said.

Xi's remarks come after Vice-Premier Liu He, who oversees the financial and industrial sector in the State Council, called for supporting the development of private enterprises by improving their access to financial services during an interview on Friday.