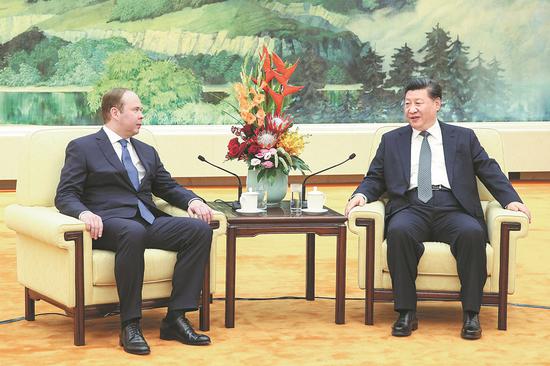 President Xi Jinping meets with Anton Vaino, chief of staff of the Presidential Executive Office of the Russian Federation, in the Great Hall of the People in Beijing on Wednesday. (WU ZHIYI / CHINA DAILY)

China and Russia should speed up implementing the consensuses reached by their two presidents and enhance cooperation in such areas as energy and innovation, President Xi Jinping said on Wednesday.

Xi made the remark while meeting with Anton Vaino, chief of staff of the Presidential Executive Office of the Russian Federation, who is on a two-day visit to China.

The China-Russia relationship is at its historical best, Xi said, adding that the two countries should cherish the partnership and deepen cooperation in all areas.

Mentioning his meeting with Russian President Vladimir Putin during the Eastern Economic Forum in Vladivostok last month, Xi said that such high-level exchanges have helped develop the China-Russia comprehensive strategic partnership of coordination. The countries should speed up the connection between the Belt and Road and the Eurasian Economic Union, he said.

In 2014, a consultation mechanism was established for annual meetings between the director of the General Office of the Communist Party of China Central Committee and the chief of staff of the Presidential Executive Office of the Russian Federation. The mechanism is of great significance, Xi said, adding that he supports maintaining such arrangements.

"Strategic cooperation with China is definitely the priority of Russia's diplomacy," Vaino said.

The Russia-China relationship is a good model for current international relations, Vaino said, adding that the traditional friendship of the people of the countries is the root of their cooperation.

Jin Yong, a professor of international relations studies, said it's innovative for China and Russia to set up such an exchange program, and it shows the importance of their relations. Such a program is of great significance for implementing the consensuses reached by the presidents and strengthening strategic mutual trust, he said.

Ding Xuexiang, director of the General Office of the CPC Central Committee, also met with Vaino.

"The General Office of the CPC Central Committee is willing to continue the good tradition of cooperation with the Russian presidential administration to ensure high-quality implementation of the consensus reached by the two leaders and to make greater contributions to the development of bilateral relations," Ding said.