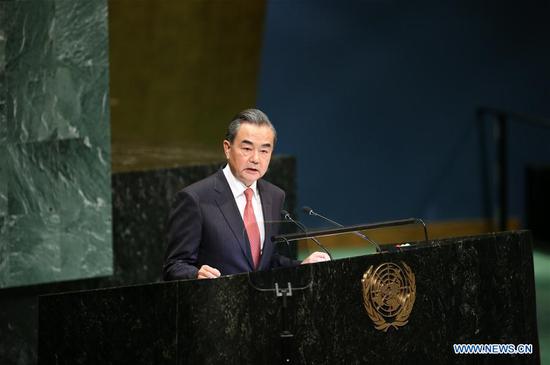 Chinese State Councilor and Foreign Minister Wang Yi addresses the General Debate of the 73rd session of the United Nations General Assembly at the UN headquarters in New York, on Sept. 28, 2018. Wang Yi on Friday delivered a speech at the General Debate of the UN General Assembly, endorsing multilateralism, world peace and free trade. (Xinhua/Qin Lang)

Wang said that the contemporary international order, which began with the founding of the United Nations, is based on the purposes and principles of the UN Charter and enhanced by the vision and practice of multilateralism.

The order has, over the past 70 years or more, brought about general peace and rapid development, he said.

"What we see today is that international rules and multilateral mechanisms are under attack, and the international landscape is filled with uncertainties and destabilizing factors," the foreign minister said.

"China's answer is clear-cut. All along, China has upheld the international order and pursued multilateralism," he added.

The Chinese top diplomat suggested that to uphold multilateralism in the new era, efforts shall be made to adhere to the following principles:

Firstly, the world shall pursue win-win cooperation. The sure way for a bright future of the world is to replace confrontation with cooperation and coercion with consultation; to stick together as one big family instead of forming closed circles; and to promote common development through consultation instead of taking a winner-takes-all approach.

Secondly, all nations shall act upon rules and order. Practicing multilateralism is, first and foremost, about upholding the UN Charter, observing international law and the basic norms governing international relations and honoring international agreements reached upon through negotiations.

Fourth, all nations must act to deliver real results. "It is imperative that we work together to uphold the international system with the United Nations at its core as well as the multilateral trading system centering on the World Trade Organization," Wang said.

He said that as a major responsible country, China commits itself to the path of peaceful development, and China will work with other countries and contribute its share to global peace and security.

He outlined China's stances on a slew of hotspot issues.

On the situation of the Korean Peninsula, China encourages all sides to move along the direction of denuclearization and peace mechanism.

Regarding the Iranian nuclear issue, it is crucial for continued implementation of the Joint Comprehensive Plan of Action (JCPOA).

The question of Palestine must not be marginalized, Wang said, adding a new round of peace-promoting efforts need to be made to explore a new mediation mechanism.

The settlement of the issue involving Rakhine State of Myanmar shall begin by accelerating the return of the first batch of displaced persons.

Wang stressed that development is essential for the world today and every country is entitled to explore a development path that suits itself.

"It is important that we adapt ourselves to the trend of economic globalization, and see to it that such a process is open, inclusive, balanced and win-win to deliver benefits to all," he said.

Regarding trade frictions, China stands for a proper settlement based on rules and consensus through dialogue and consultation on an equal footing, he said. "China will not be blackmailed or yield to pressure."

China is also acting to uphold the free trade system and international rules and order for the benefit of global recovery and the common interests of all countries.

China hopes to see negotiations on the implementation guidelines of the Paris Agreement be concluded, as scheduled, by the end of this year to boost joint efforts for global ecological conservation, he said.

He also noted that this year marks the 40th anniversary of China's reform and opening-up program.

"Over the past 40 years, we have worked hard and forged ahead successfully along a path of socialism with Chinese characteristics," Wang said, adding the path has brought fundamental changes to China and has provided the world with opportunities for common development.

Going forward, China will not reverse course or shut the door. The country will open wider to the world. It will not erect market barriers but will expand access to the Chinese market, Wang said.

He noted that the Belt and Road Initiative proposed by President Xi Jinping is a public good China offers the world. It has grown into the largest platform for international cooperation.

He stressed that to strengthen cooperation and solidarity with other developing countries has been and will continue to be the staunch strategic priority for China's diplomacy.

The United Nations is the premium platform to advocate and practice multilateralism. China hopes the international community will support the UN in playing its central role in international affairs.

"We call upon people of all countries to join hands and work together to build a community with a shared future for mankind," Wang said.