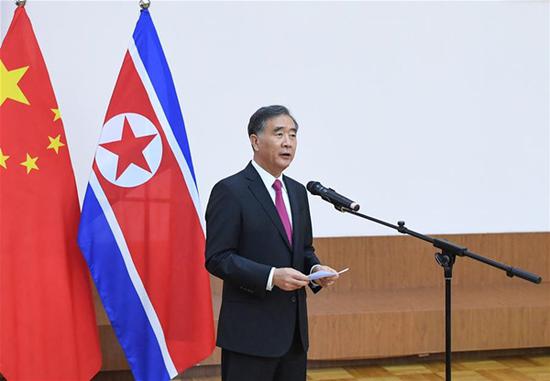 Wang Yang, chairman of the National Committee of the Chinese People's Political Consultative Conference, addresses a reception to celebrate the 70th anniversary of the founding of the Democratic People's Republic of Korea (DPRK), at the DPRK Embassy in Beijing, capital of China, Sept. 6, 2018. (Xinhua/Shen Hong)

Commissioned by Xi Jinping, general secretary of the CPC Central Committee, Wang congratulated the anniversary on behalf of the CPC, Chinese government, and Chinese people.

Wang said under the leadership of top leaders Kim Il Sung, Kim Jong Il and Kim Jong Un, and that of the Workers' Party of Korea (WPK), people of the DPRK have resolutely defended the country's independence and made major achievements in the socialist cause.

He said China believes that the DPRK's socialist cause will embrace new bright prospects as it implements the decision at the Third Plenary Meeting of the Seventh Central Committee of the WPK to adjust the strategic route and focus on developing the economy.

China is willing to develop relations with the DPRK to the benefit of the two countries and the two peoples and make new contributions to regional peace and stability, he said.

Chi Jae Ryong, the DPRK ambassador to China, said the WPK and the government of the DPRK stand firm on carrying forward the traditional friendship between the two countries.

He said the DPRK hopes to work with China to push for greater development in relations between the two parties and the two countries.