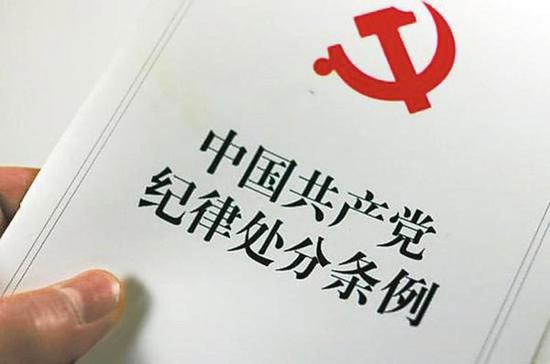 The Central Committee of the Communist Party of China has published a revised 142-clause set of regulations on disciplinary action, and has called for its full implementation.

Experts said the new action adapts to new missions and requirements for Party-building and lays down governing principles for strictly managing the Party and strengthening discipline.

A circular issued by the committee noted that the regulations were introduced in October 2015 and have played a key role in upholding the CPC Constitution and other intraparty regulations, ensuring internal discipline and the exercise of strict self-governance.

The circular said the revisions were made after the 19th National Congress of the CPC, which placed discipline in the overall strategy of Party building in the new era. Content related to discipline in the CPC Constitution was augmented.

The regulations were made public on Sunday night, the circular said.

Tightening political discipline and rules, the regulations aim at upholding the core status of General Secretary Xi Jinping in the Central Committee and Party overall, and upholding the authority of the committee and its centralized, unified leadership, the circular said.

The regulations focus on solving problems and tightening the institutional controls on prominent issues concerning Party self-governance, it added.

Under the new regulations, those who are not loyal to the Party, or form cliques or oppose major decisions and directives made by the Central Committee; or those who don't implement the Party requirements or who disturb discipline inspectors will be seriously punished.

Severe punishments will also be handed down to those who abuse power or who are involved in corruption to harm the interests of the public, or those who shelter Mafia-style gangs, the new rules said.

Jiang Laiyong, a researcher at the research center of clean governance of the Chinese Academy of Social Sciences, said the revised regulations further clarify political discipline and Party rules, and emphasize the Party's core leadership structure, as well as the authority of the CPC Central Committee.

"The new rules are more comprehensive, up-to-date and targeted," he said.

Chen Yaxin, an official in the law department of the Central Commission for Discipline Inspection, said that those drafting the amendment had carefully studied discipline-related content in the Party's Constitution, summarized new practices and experiences that disciplinary authorities had gained since the Party's 18th National Congress, and analyzed violations and crimes committed by senior officials in the past few years.

Ma Senshu, head of the law department, said the revised regulations better clarify the relationship between "violating Party discipline" and "breaking the law". That distinction is designed to step up supervision and apply strict Party rules to prevent corruption.

Under the new rules, he said, those who violate Party discipline will first receive punishments within the Party, including warnings, loss of position or expulsion from the Party. If they are found to have violated the law - including abuse of power, bribery or neglect of duty - they will be detained for further investigation and face charges.