White House says U.S. not to lift tariffs on Turkey even Brunson released 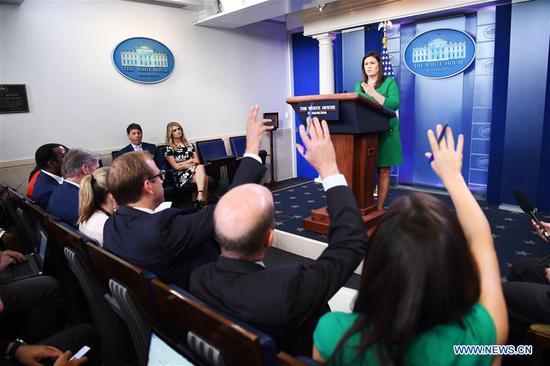 The White House said on Wednesday that the United States will not lift sanctions on Turkish steel and aluminum products even if detained American pastor Andrew Brunson is released.

In a press briefing, White House spokesperson Sarah Sanders said, "The tariffs that are in place on steel would not be removed with the release of Pastor Brunson. The tariffs are specific to national security."

"The president's been clear about the steel and aluminum industries, steel, particularly, in this case; that those are industries that must be protected. We must have the ability to reach certain levels of manufacturing those products here in the United States for the purposes of national security," she explained.

Sanders responded that "the tariffs from Turkey are certainly regrettable and a step in the wrong direction," adding "certainly we don't support Turkey's decision to retaliate against us protecting our national security interests."

"The tariffs that the United States placed on Turkey were out of national security interests, theirs are out of retaliation," she noted, refusing to reveal U.S. further actions to respond to Ankara's statement.

"It's something that we won't forget in the administration," she added.

U.S. President Donald Trump tweeted last week that he had authorized to double the tariffs on steel and aluminum products from Turkey to 50 percent and 20 percent respectively.