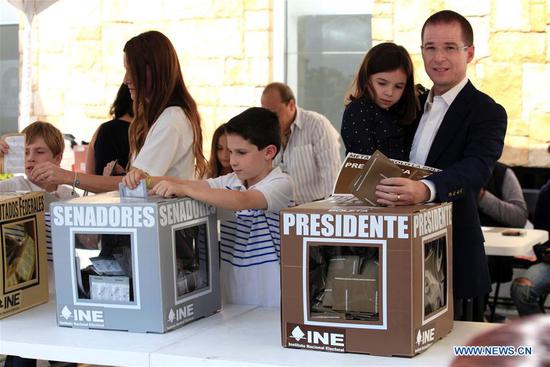 Andres Manuel Lopez Obrador, presidential candidate for the coalition "Together We Will Make History", is interviewed by media at a polling station during the presidential elections, in Mexico City, capital of Mexico, on July 1, 2018. (Xinhua/Str)

Mexican voters have elected a left-leaning government for the first time in recent history in a bid to narrow the vast wealth gap, and combat corruption and violence, according to political observers.

Progressive candidate Andres Manuel Lopez Obrador, whose catchphrase is "for everyone's good, the poor come first," won Sunday's general elections by a landslide, giving him the mandate needed to overhaul the existing system.

What's more, Lopez Obrador's National Regeneration Movement (Morena), the left-of-center party he founded just four years ago, appears to have swept up a majority of seats in both houses of Congress, handing him a level of legislative backing no other president has enjoyed since 1997.

Latin America's No. 2 economy is a land of stark contrasts. Away from its bustling cities, around 45 percent of the 120 million population lives in poverty, mainly in rural indigenous communities. Lopez Obrador has said his government will focus on alleviating their plight.

"A majority of citizens voted for the option he proposes," Blanca Heredia, research professor at the Center for Research and Teaching in Economics, told Xinhua.

But how does the president-elect plan to finance his welfare program?

Economist Simon Levy, founder of the Mexico-China professorship at Mexico's National Autonomous University (UNAM), said the idea is to rein in public-sector overspending and reorient the budget towards the poor.

Lopez Obrador aims "to transfer the cost of government to investment in the people," and "gradually equalize and reduce inequality without creating dependence," said Levy.

The incoming leader, who is expected to take office on Dec. 1, has said he plans to raise wages for working Mexicans, including police officers and soldiers, and lower salaries for top officials, including himself, as he did when he was mayor of Mexico City.

He also plans to activate the economy through public infrastructure projects that will generate jobs.

Pre-election polls consistently showed Lopez Obrador leading the field of candidates, amid discontent with rising levels of crime and corruption.

"What we are seeing and experiencing is that the society ... is fed up with having deputies that earn a lot and do little, and their only job is to bat around proposals that are for the good of the country," said Manuel Quijano, a professor from the Department of Social and Political Science at UNAM.

Quijano described Mexico's social inequality and distribution of wealth as "dreadful," but said other factors were also at play, such as corruption scandals involving government officials and the unpopular 2013 energy reforms, which opened the nationalized oil industry to private investors and sent gasoline prices skywards.

Alicia Barcena, executive secretary of the United Nations Economic Commission for Latin America and the Caribbean, said Monday that her agency is willing to collaborate with the newly-elected Mexican authorities "to spur sustainable development centered on equality."

How successful Lopez Obrador is at bridging the wealth gap in Mexico "will depend on his capacity in political conciliation and on his technical capacity," said Heredia, adding that those are things Mexican society "will have to demand."