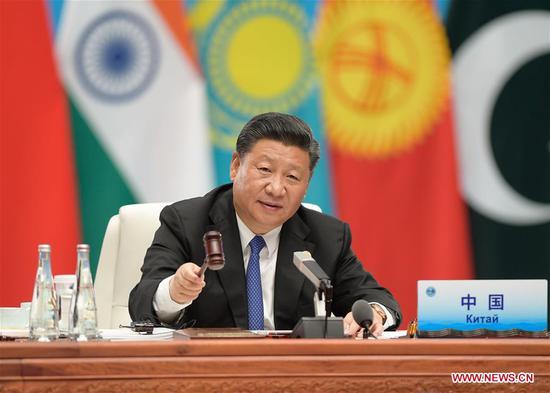 The 18th Meeting of the Council of Heads of Member States of the SCO in east China's port city of Qingdao marked the first gathering of leaders of all its eight member states -- since India and Pakistan were admitted as full members last year.

Joined by leaders from across Eurasia and heads of international organizations at a roundtable meeting, Xi hailed the 17-year-old organization as "a new model for regional cooperation" and shared ideas on how to tackle global challenges.

The two-day summit saw leaders sign documents in diverse fields including security, trade facilitation and people-to-people exchanges, sending out a signal of unity and collaboration, against the backdrop of global challenges such as hegemony, power politics, security threats, unilateralism and trade protectionism.

"We should, guided by the Shanghai Spirit, work closely to build an SCO community with a shared future, move toward a new type of international relations, and build an open, inclusive, clean and beautiful world that enjoys lasting peace, universal security and common prosperity," Xi said.

Now the spirit is embodied with rich content as shown in Xi's speech at the summit.

"We should uphold innovative, coordinated, green, open and inclusive development," he said, calling for resolving issues regarding unbalanced development.

"We should reject the Cold War mentality and confrontation between blocs and oppose the practices of seeking absolute security of oneself at the expense of the security of other countries," he said.

The president stressed open and inclusive cooperation for win-win outcomes.

"We should reject self-centered, short-sighted and closed-door policies," he said. "Equality, mutual learning, dialogue and inclusiveness between cultures should be championed."

A ROADMAP FOR ACTION

The Qingdao summit went beyond theories and concepts, outlining a roadmap for concrete action.

Xi stressed the need to cooperate on combating terrorism, separatism and extremism, and conduct a "Peace Mission."

The SCO's economic component has grown more prominent in recent years, and Xi proposed increasing the complementarity of development strategies and pursuing the Belt and Road Initiative to achieve shared growth through discussion and collaboration.

Calling for closer ties through people-to-people and cultural exchanges, Xi said China would provide 3,000 training opportunities in human resources development for SCO member states in the next three years to enhance public understanding and support for the SCO.

The SCO was established in 2001 by China, Kazakhstan, Kyrgyzstan, Russia, Tajikistan and Uzbekistan. India and Pakistan joined as full members last year at the Astana summit in Kazakhstan. Its observer states are Afghanistan, Belarus, Iran and Mongolia.

The Qingdao summit is one of the four international events Xi chairs in China this year, practicing "major-country diplomacy with Chinese characteristics."

The other three events are the Boao Forum for Asia annual conference in April, the Forum on China-Africa Cooperation summit in September and the First China International Import Expo in November.

They are all aimed at building "a new type of international relations" and "a community with a shared future for humanity" -- two ideas Xi has expounded over the past five years.