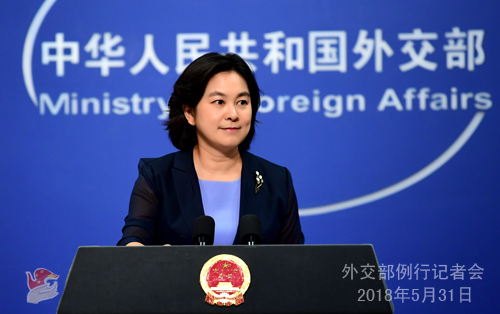 "Hyping up militarization in the South China Sea by some people in the U.S. is quite preposterous, just like a thief crying 'stop thief'," Foreign Ministry spokesperson Hua Chunying said at a daily press briefing.

She said that the military forces deployed by the United States far exceed those combined by China and other coastal countries in the South China Sea.

She said it is legitimate and justified for China to deploy necessary and limited national defense facilities on its own islands and reefs, as it is exercising its self-defense right as endowed by the international law.

"China adopts a national defense policy that is defensive in nature, and we will not attack others unless we are attacked," Hua said.

She called on the United States to abandon meaningless hype and do more things conducive to mutual trust, cooperation, and regional peace and stability.

In response to the U.S. move to rename Pacific Command to U.S. Indo-Pacific Command, Hua called on the United States to act responsibly in the Asia Pacific region no matter how the name is changed, and to play a constructive role in regional peace and stability.