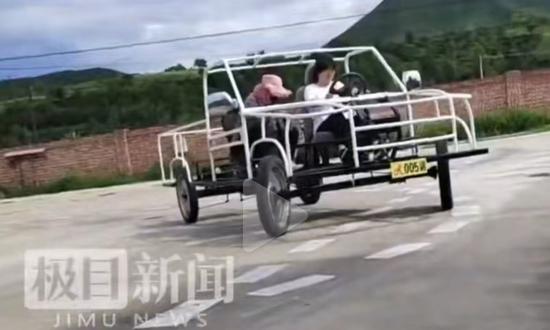 Screenshot of video widely circulated on the Internet shows that at a driving school in Chengde, North China's Hebei Province, a number of hollowed out training vehicles with only a skeleton driving. (Photo/Jimu News)

A video widely circulated on the Internet shows that at a driving school in Chengde, North China's Hebei Province, a number of hollowed out training vehicles with only a skeleton driving. These "frame cars" are only welded with steel frames, and the surfaces are not shielded by metal housings. The driving school students can operate the car and drive it slowly on the training ground.

The video shooter, an 18-year-old student surnamed Yang, said that he did not expect to learn his driving skills with such a strange training car.

Yang noted that these vehicles are mainly provided for novices who have just enrolled in driver training, for them to practice how to use a steering wheel, and understand the traffic marking in the ground delineation situation. He practiced in these "frame cars" for three days, and now he has started to learn driving skills in a real car.

Surnamed Liang, the principal of Chengkun Driving School where Yang enrolled in training told media that these "frame cars" are only driving simulators for students. He specially removed the shell of the car in order to eliminate the sense of confinement and nervousness of students.

Liang said he has built eight such simulators with his own research and development, each costing thousands of dollars, these simulators have just been put into use for a month, and currently play a good training role.

These simulators' internal brakes, clutch, handbrake are complete, they use an electric start and the maximum speed is only a few mph, which cannot be driven on the road, Liang said, noting that he has filed a patent for these simulators, which are still under review."