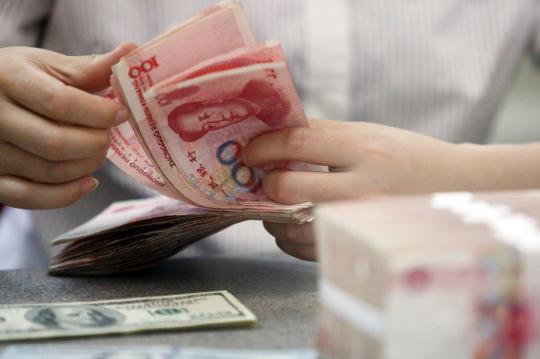 Still remains in third place behind dollar, euro but ahead of yen, pound

The enhanced standing of the renminbi as a key global reserve asset will further boost the Chinese currency's accelerated march toward playing a more central role in the international financial governance system, officials and experts said.

Nevertheless, more reform and opening-up of China's financial markets are still necessary for the renminbi to become a well-acknowledged global currency like the US dollar and the euro, they added.

Taking effect on Monday, the International Monetary Fund has raised the weighting of the renminbi in the basket of currencies that make up the Special Drawing Rights－an international reserve asset also known as the SDRs－by 1.36 percentage points to 12.28 percent.

The IMF made the decision for the weighting hike based on developments in global trade and financial markets from 2017 to 2021.After the weighting increase, the Chinese currency continues to hold the third-largest overall share within the SDR basket, behind the dollar and the euro but ahead of the Japanese yen and the British pound.

As evidence of the hastened progress of the renminbi further integrating with the global financial governance system, experts said the weighting increase will help boost overseas holdings of renminbi-denominated assets and solidify market confidence in the currency.

Zhang Liqing, director of the Center for International Finance Studies, which is part of the Central University of Finance and Economics, said the upgrade marks the latest progress in the internationalization of the currency.

As an emerging international currency, the renminbi's roles in acting as a medium of international transactions, a pricing unit and a reserve currency, have appeared in different degrees, though it is still quite behind the dollar and the euro, Zhang said.

The renminbi has retained its position as the fifth most active currency for global payments by value in June, with a share of 2.17 percent, up from 2.15 percent a month earlier, according to the Society for Worldwide Interbank Financial Telecommunication, or SWIFT.

As for the renminbi's function as a reserve currency, its share in global foreign exchange reserves has risen to 2.88 percent as of the first quarter, ranking fifth worldwide and marking the highest reading since the IMF began releasing the figures in 2016.

Moreover, the Chinese currency has also played a bigger role in safeguarding global financial stability as the Bank for International Settlements said in June that it will develop a Renminbi Liquidity Arrangement. The arrangement will act as a yuan reserve pool, from which participating central banks can obtain renminbi liquidity when needed to deal with market volatility.

The internationalization of the renminbi has somewhat been boosted by the dollar's credibility being challenged, while the renminbi can further act as a safe-haven currency if a global economic recession occurs, Zhang said.

"More importantly, whether China can seize these opportunities depends on whether the country can make more positive progress in deepening reform and opening-up, especially in terms of financial opening-up," Zhang said.

At a meeting of the State Administration of Foreign Exchange on Thursday, it was decided that deepening reform and opening-up in the foreign exchange market will be one of the key tasks for the country's foreign exchange regulator in the second half.

The administration will improve the management of overseas investors' funds in the domestic bond market and expand pilot programs to facilitate cross-border financing, said a statement released after the meeting.

Wang Chunying, deputy head of SAFE, said there is significant potential for foreign investors to further raise holdings in renminbi-denominated assets, with the weighting increase of the renminbi in the SDR basket demonstrating the international community's recognition and confidence in China's economy and financial markets.