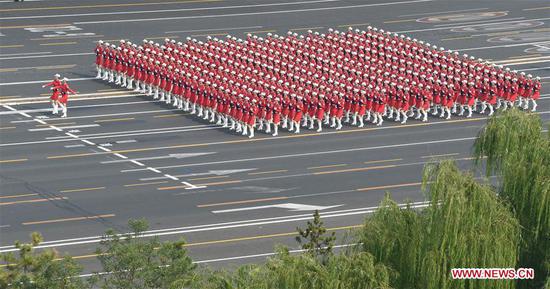 A women militia formation receive inspection during a military parade celebrating the 70th founding anniversary of the People's Republic of China (PRC) in Beijing, capital of China, Oct. 1, 2019. (Xinhua/Wang Jianwei)

A formation of women militia, selected from the militia force in Beijing's Chaoyang District, marched through Tian'anmen Square on Tuesday, as part of the National Day military parade in celebration of the 70th founding anniversary of the People's Republic of China.

They come from the district's education, state-owned enterprise and health sectors, as well as universities including Communication University of China, Beijing Institute of Fashion Technology and China Women's University.

Members of the formation have an average age of 26 and height at 172 centimeters, with 81 of them being mothers already.