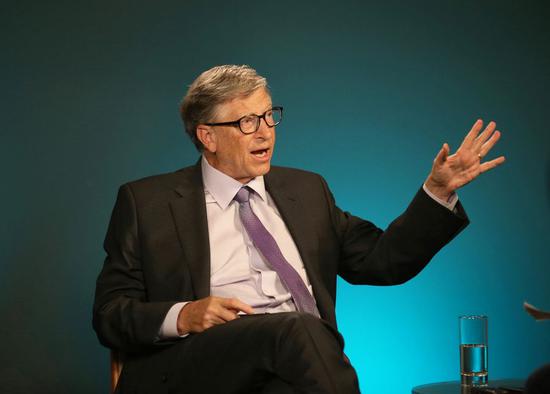 China has made remarkable progress in improving health equity and reducing poverty, offering lessons that could help other developing countries, including in Africa, accelerate their development, Bill Gates has said.

"The success of China in so many ways is amazing, starting with agricultural productivity, improving the health, [and] a very strong education system with some of the top universities in the world," said Gates, co-chair of the Bill & Melinda Gates Foundation, which opened a China office in 2007.

China is now contributing innovations that can help some of the other countries that are not as far along as China, "help accelerate their development based on the lessons that come from China," the Microsoft co-founder told Xinhua in an exclusive interview ahead of a two-day trip to China.

"As we (the foundation) enter the second decade of our partnership with China, we remain committed to helping China address its remaining domestic challenges in health and development, as well as supporting China in sharing what it has learned from its own progress to help the world become a healthier and more prosperous place," Gates said.

Gates is arriving in Beijing on Wednesday. He will attend an event marking the 10th anniversary of the foundation's work on tuberculosis (TB), a primary focus of its health efforts in China.

He is expected to talk with Chinese health officials about the progress in the TB program and future plan to reduce TB even further.

In 2009, the foundation launched a TB prevention and control program in collaboration with China's then Ministry of Health (now the National Health Commission).

Over the course of 10 years, the program has shortened the time required for diagnosing multidrug-resistant TB from two months to two hours. "We've gone from having a patient having to take 13 pills to only three every day," Gates said.

With new drugs, tools and mechanisms, the cure rate for TB has been increased where the program has reached, and patients' share of costs significantly reduced, he added.

"To solve such a complex problem as TB, the Gates Foundation alone is not enough. We have worked side by side with our partners to design and implement a program that improved not only the quality of care but also its affordability, thus significantly reducing TB cases and related deaths," Gates said.

The next phase of TB investment, he noted, will focus on new TB drug and vaccine development, which will "not only benefit patients in China but also those most in need around the world."

Aside from TB treatment, the foundation is also working with China's public, private and social sectors in poverty alleviation, nutrition improvement, strengthening of the national immunization program and control of the HIV epidemic, among other efforts.

China has lifted over 800 million people out of poverty and vowed to wipe out extreme poverty by 2020. The foundation is supporting China in going the final mile, according to Gates.

"Now we're involved in the poverty work where China's got a very impressive goal to completely get rid of extreme poverty in the country. We've partnered with them to help out. We have a rich set of programs that are in the country, all of which we feel good about," he said.

Gates has traveled to China multiple times since his first trip in the 1980s. Since then, momentous changes have taken place not only inside China, but also in China's role in global affairs.

"If you go back to 1980, China was not that engaged and other countries weren't paying as much attention because, in fact, the trade levels were very, very low and people really underestimated what would happen in China," Gates said.

Today, however, China is one of the world's top two economies, trading with a lot of countries, and a large number of Chinese companies are "going out in the world with their products."

On the political side, China is engaging in UN institutions and contributing to them, Gates said, citing the Forum on China-Africa Cooperation as "a great example of how China's now a big part of countries working together, which when I first went was not the case at all."

China has shown strong commitment to using its expertise and experience to help lift people in other countries -- especially African countries -- out of poverty, Gates said.

The foundation is partaking in these efforts.

"We are working with partners to bring China's products, experience, and know-how to African countries to support their efforts on health system strengthening, infectious disease control, and agricultural transformation," Gates said.

To this end, the foundation is partnering with the Chinese government and research institutions to introduce appropriate farming techniques, new seed varieties and other innovations to African countries to help them improve productivity and agricultural industry value chain.

It is also working to accelerate the entry of high-quality, low-cost Chinese-made malaria commodities into the global market, and facilitate the sharing of China's experience in malaria control in regions with high malaria incidence.

While in China, Gates will also attend the 2019 New Economy Forum where leaders from all over the world will compare notes on how to cooperate better on such tough issues as climate change.

"It's a huge problem... The sad fact about climate change is that it's the poorest who will suffer, even though they have done nothing to cause the problem... The temperature increase near the equator is affecting particularly farmers who have very small amounts of land," Gates said.

He believes that to address the issue, it is crucial to have all the countries engage and cooperate, and in particular, have the United States and China set a good example of driving down emissions and innovating to make the cost much lower.

China has shown a strong commitment to be one of the leaders, he said, both in reducing its own emissions and in helping to invent new approaches that will help all the countries be able to reduce their emissions.

"We do need the U.S. to get engaged and to really work with China to get all the countries engaged, to make it very hard for a country not to participate. That's the only way you get to global zero [emissions], which is what the goal is," Gates said.

He voiced concern over the U.S. withdrawal from the Paris Agreement.

"It is critical that future U.S. leadership reverse this decision and rejoin the Paris accord," Gates said.