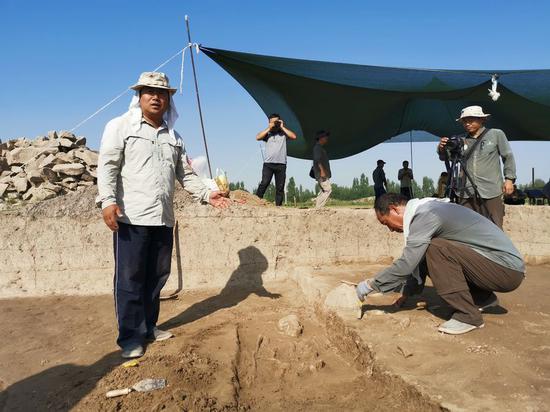 The Ferghana Valley on the west of the Pamirs, one of the most densely populated regions of Central Asia, known for the precious Ferghana horse breed and a key hub on the ancient Silk Road, has been attracting scientists and researchers from around the world for decades.

China, as a neighboring country, is among the most active participants. In 2012, a joint international archaeological expedition of Chinese and Uzbek scientists started excavating the ancient settlement of Mingtepa, a "living fossil" of the Silk Road dating back to 2,000 years ago, in Uzbekistan's Andijan region in the southeast of the Ferghana Valley.

Seen from the outside, the ruins of the Mingtepa city were surrounded by five-meter-high walls with gates, and on both sides of the gates were rectangular towers with loopholes, which, according to scientists, are typical of medieval Central Asian cities and the ancient Chinese capitals -- Luoyang and Chang'an.

Scientists noted that the ancient city was equipped with multiple well-functioning city defense facilities, large-scale buildings and road systems, and there were also well-developed handicraft workshops as well as a cemetery outside the city.

"These important archaeological findings will enable the international archaeological community in Central Asia to renew their recognition of the Mingtepa site and redefine its position in the history of the Ferghana Valley and of ancient Central Asia," said Zhu Yanshi, deputy director of the Institute of Archeology at the Chinese Academy of Social Sciences (CASS).

As of today, the joint archaeological research team has unearthed from the ruins valuable materials, as well as information on the structure and fortification system of the ancient Mingtepa city, proving it the most fortified city of the Ferghana Valley in antiquity, archeologists say.

Speaking of the archaeological achievements, Uzbek experts highly appreciated the contributions made by the Chinese side. They highlighted the use of a unique Chinese archaeological tool, the "Luoyang shovel," as well as advanced methods of accurate measurements, computer mapping and data analysis.

"The archaeological team for the first time discovered the remains under brown soil, which expanded the excavation scope of the site, and even led to the discovery of the outer city," said Bokijon Matbabaev, director of the Department of Archaeological Research at the Academy of Sciences of Uzbekistan.

The existence of the outer city confirmed that Mingtepa was a big city with rich culture instead of a temporary fortress, making it the largest ancient city site in the Ferghana Valley.

According to Liu Tao, a researcher at the Institute of Archaeology at the CASS, the successful joint work will provide new data and make a great contribution to the study of Mingtepa and to the preservation of Uzbekistan's cultural heritage.

"The arrival of Chinese experts has finally unveiled the mystery of this ancient city and made the entire Uzbek community aware of the importance of its protection," said 23-year-old Doniyor Sobirov, a student at the History Department at Andijan State University.

In 2016, a monument was erected at the entrance to the Mingtepa hillfort, a symbol of the friendship and cooperation between the archaeologists of the two countries.

Alizhan Kurbanov, head of the Historical and Cultural Heritage Department of the Andijan region, said the results of the expeditions and the extracted material add new content to the history of the great Silk Road.

According to historical sources, the famous Chinese diplomat of the Han Dynasty, Zhang Qian, braved a world of uncertainties to open up a trade route now known as the Silk Road. Thanks to him, alfalfa seeds, walnuts and racehorses were brought to China, and in Central and West Asia they learned about many Chinese products, especially silk.

Now scientists believe that the archaeological studies on the Mingtepa city have proved that it played an important role in boosting the economic and cultural exchanges along the great Silk Road.

The joint project to study the Mingtepa city is also an important part of the China-proposed Belt and Road Initiative (BRI). "I believe that the implementation of the BRI will make this ancient Silk Road thrive again," Kurbanov added.