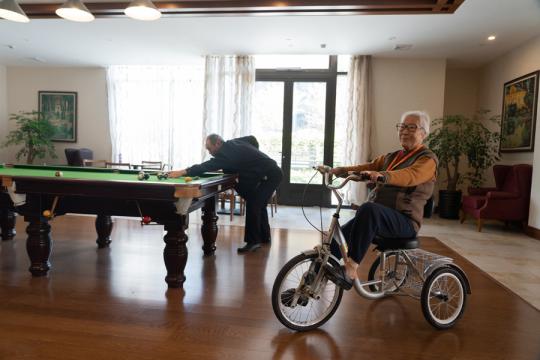 Seniors enjoy life at a community operated by Starcastle Senior Living Investment and Operations Group in Shanghai, one of many of its kind in China. [Photo by Gao Erqiang/chinadaily.com.cn]

Healthcare services for seniors are expected to improve significantly both in quantity and quality over the next three years, according to a guideline released on Friday.

By 2022, related standards and regulations on healthcare, as well as a national healthcare system for seniors will be established, according to the guideline released by eight central government departments, including National Health Commission and National Development and Reform Commission.

Wang Haidong, chief for population aging at the National Health Commission, said the guideline, the first of its kind in China, was released to cope with rising demand for healthcare services from the rapidly increasing number of seniors in China.

The number of people 60 years old or above in China reached 250 million by the end of last year, and 75 percent of them had at least one chronic disease, he said. More than 40 million of them are disabled or partially disabled. However, the supply of healthcare services for them are neither adequate nor balanced, he said.

"They have very urgent needs for healthcare services," Wang said.

The commission is also making a regulation on medical institutions providing door-to-door services, he said.

According to the guideline, more than half of all secondary general hospitals in China will have a geriatric department by 2022, and the number of beds for elderly care will account for 30 percent of the beds in grassroots medical institutions.

In addition to improving diagnosis and treatment, authorities will improve health education and intensify disease prevention and control, the guideline said.

"Implementing the guideline will help narrow the gap in senior healthcare services between rural and urban areas, and between different regions, to promote fair and accessible services," Wang said.

"It is of milestone importance to improving health for seniors and promoting healthy population aging in China," he said.

Wang Jianye, director of the National Center of Gerontology in Beijing, said China lags behind some Western countries in elderly care.

"We should provide more comprehensive healthcare services for the elderly, treating every patient as a whole, rather than just focusing on individual diseases, so as to improve elderly patients' abilities to live independently and maintain their quality of life as much as possible," he said.