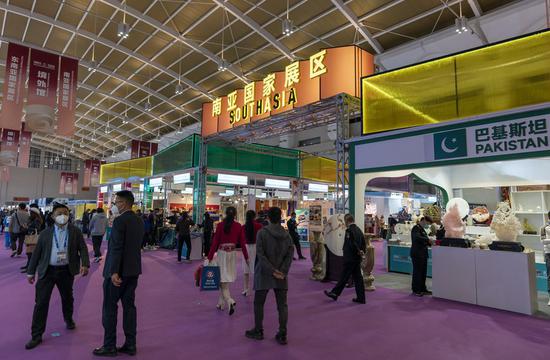 Livestreaming as a marketing tool has not only developed rapidly in China in recent years, but also gained immense popularity in South and Southeast Asian countries.

The 6th China-South Asia Exposition and the 26th China Kunming Import and Export Fair, held from Nov. 19 to 22 in Kunming, capital of southwest China's Yunnan Province, allowed exhibitors to harness the power of e-commerce as they displayed their products through livestreaming and conducted negotiations online.

Themed "New Opportunities for New Development," the four-day event saw the participation of exhibitors from 80 countries, regions and international organizations via both online and offline channels.

With an area of over 130,000 square meters, the exposition featured 13 pavilions, eight of which were professional exhibition halls covering fields such as green energy, modern plateau agriculture, advanced manufacturing, tourism and culture.

"By setting up professional exhibition halls, we aim to assist the free flow of key elements such as capital, commodities, and science and technology," said Li Chenyang, deputy director of the executive committee of this year's exposition.

At the signing ceremony of economic and trade cooperation projects on Sunday, a total of 169 contracted investment projects involving 12 key industries of the province were inked, with the combined value exceeding 400 billion yuan (about 55.8 billion U.S. dollars).

Despite the headwinds induced by the COVID-19 pandemic, China has upgraded its trade relations with South Asian countries, with the trade volume increasing by more than 50 billion dollars in 2021 compared to the pre-pandemic level in 2019, nearly double the level from a decade earlier, said Chinese Assistant Foreign Minister Wu Jianghao.

Notably, in the first 10 months of this year, the China-India trade volume hit 114 billion dollars, according to the General Administration of Customs of China.

Rajeev Singh, director general of the Indian Chamber of Commerce, said that the mutual investment amount can still be expanded as trade and commercial bonds between India and China are deepening, and bilateral trade surpassed 100 billion dollars for the first time in 2021.

A similar pattern can be seen between China and Bangladesh. The bilateral trade volume rebounded to 21.4 billion dollars from January to September, a 21.2 percent increase year on year, according to Li Jiming, Chinese ambassador to Bangladesh.

"In September, China granted zero-tariff treatment to 98 percent of taxable items from Bangladesh, allowing Bangladesh to expand its export to China," Li said while addressing the event via video. "Now, Chinese people can taste the flavor of delicacies such as hilsas, Bangladesh's national fish."

With the booming trade between China and South Asian countries, people to people exchanges also accelerated over the years. Currently, there are over 2,000 international students from these countries in Yunnan.

Zeeshan Shafiq, who came to Yunnan from Pakistan in 2019 to pursue his doctoral studies in transportation engineering, believes that there are abundant opportunities and development prospects in China.

"I was always looking forward to visiting China," Shafiq said. "I immediately applied for the Chinese government's scholarship after I obtained my master's degree."

Wang Yubo, governor of Yunnan, said the province is becoming an important platform to promote exchanges and cooperation between China and South Asian countries thanks to the Belt and Road Initiative.

"China and South Asian countries are advancing on the course of economic development and shouldering the common task of improving people's livelihoods," said Jiang Jiang, vice president of the Chinese People's Association for Friendship with Foreign Countries.

Since the first China-South Asia Exposition in 2013, 2,770 domestic and foreign projects have been inked, according to official data.

Specialty products such as Thailand's jasmine rice and snacks from Vietnam have got the chance to be promoted at the exposition.

Anura, a tea merchant from Sri Lanka, has engaged in tea business for 18 years. He has attended every session of the exposition.

"I think international events like the China-South Asia Exposition will bring us a bigger platform and more opportunities," said Anura.