With 56 bln yuan in transactions, where is China's digital yuan heading? 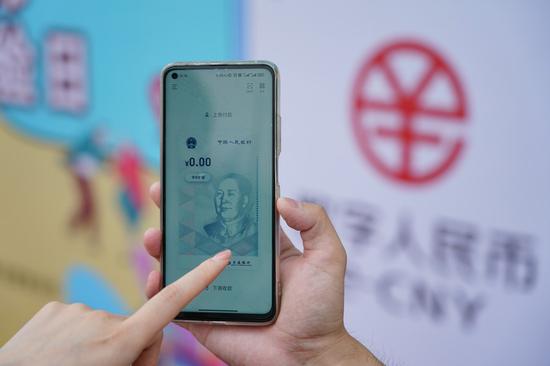 A staff member of the Bank of Communications demonstrates the use of the online wallet of digital RMB at the Happy Valley Beijing theme park in Beijing, capital of China, June 16, 2021. (Photo: Xinhua/Chen Zhonghao)

From bill settlements in restaurants to transactions on the futures market, China's digital fiat currency, or the e-CNY, has been piloted in various scenarios amid the country's push to develop this nascent form of payment.

What progress has been made so far? How does China handle the challenges that a digital currency brings? What are the next steps?

In a speech delivered Tuesday via video at a conference of the Bank of Finland Institute for Emerging Economics, China's central bank governor Yi Gang provided the latest developments on the digital yuan and unveiled the country's future moves.

-- What progress has been made so far?

As of Oct. 8, the number of pilot scenarios for the digital yuan in the country has exceeded 3.5 million. Over 123 million personal wallets have been opened, with the transaction volume totaling 56 billion yuan (about 8.76 billion U.S. dollars), according to the governor of the People's Bank of China.

China's efforts in developing its central bank digital currency (CBDC) started in 2014 when it first started to study digital fiat currencies, followed by central bank moves to engage in research and development cooperation with commercial banks and internet companies in 2017.

Pilots of the digital yuan kicked off in late 2019, and they have since been rolled out in 10 Chinese cities, including Beijing, Shanghai and Shenzhen. With plans to further test it at the upcoming 2022 Beijing Winter Olympics, the scenarios for the digital yuan in the country are rather wide-ranging.

-- How does it handle the challenges?

In the opinion of governor Yi, the design of the digital currency matters, as it will have a major impact on both monetary policy and financial stability.

To minimize the negative implications of the digital yuan, China has positioned e-CNY as M0, or cash in circulation, that bears no interest, thus reducing competition with banks for deposits, Yi said.

A two-tier system has been adopted in the country, whereby the central bank controls the issuance while commercial banks and payment institutions act as intermediaries providing exchange and payment services.

The central bank has set upper limits for wallet balances and transaction amounts, in an effort to minimize the risk of bank runs. It also aims to test e-CNY's impact on monetary policy and financial markets in the pilot, the governor said.

As for privacy protection, Yi said that data collection relating to the CBDC will follow the principle of "anonymous for small-value and traceable for large-value transactions," pledging that the amount of data gathered for the CBDC will be less than that for existing e-payment instruments.

-- What are the next steps?

The digital yuan in the country will mainly be designed to meet the demands of domestic retail payments, Yi said, adding that the design and use of e-CNY will be improved based on pilot results.

Yi specified the country's next steps in digital yuan development, saying that the focus will be placed on establishing a management model with reference to cash and bank accounts, enhancing its efficiency, privacy protection and anti-counterfeiting features, while increasing interoperability with existing payment tools.

The country will also work to improve the inclusiveness and availability of the digital yuan, according to Yi.

Despite the rapid development of the digital currency, Yi stressed that China will adopt a market-oriented approach to using e-CNY and issue as much e-CNY as consumers need.

"Cash will not die out in the foreseeable future. As long as there is demand for cash, we will continue to supply cash," Yi said.