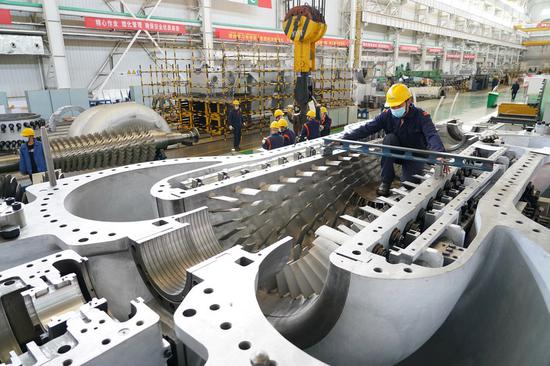 China's centrally-administered state-owned enterprises (SOEs) will see their total assets reach nearly 69 trillion yuan (about 10.56 trillion U.S. dollars) at the end of 2020, representing an increase of 45 percent compared with the end of 2015, the country's top state assets regulator has said.

During the 13th Five-Year-Plan (2015-2020) period, SOEs have competently coped with complex and grim situations while their economic efficiency steadily improved, with annualized operating revenue, net profits and labor productivity up 5.6 percent, 8.9 percent and 7.8 percent, respectively, according to a recent meeting held by the State-owned Assets Supervision and Administration Commission (SASAC).

The SOEs have kept advancing supply-side structural reforms and other market-oriented reforms in the past five years, which have led to a marked improvement in the innovation capacity, competitiveness and capability of resisting risks in the state-owned economy, said Hao Peng, chief of the SASAC.

Hao said that work related to state-owned assets and SOEs during the upcoming 14th Five-Year-Plan (2021-2025) period should be done against the backdrop of the country's new development paradigm.

China unveiled moves earlier this year to pursue a new development paradigm of "dual circulation," which allows the domestic and overseas markets to reinforce each other, with the domestic market as the mainstay.