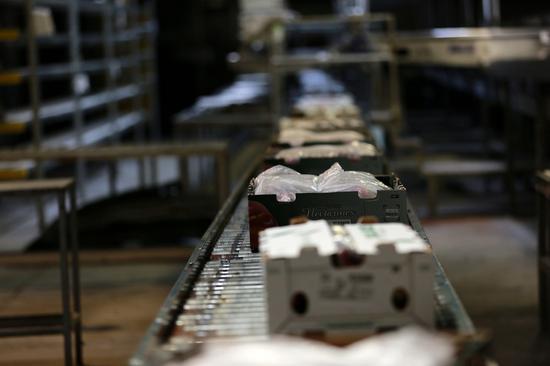 Nectarines are seen in a factory of Agricola Garces in Mostazal, Chile on Jan. 19, 2018. (Xinhua/Xu Rui)

As more Chinese consumers look for high-quality products with high nutritional power, "avocados from Chile have both components and it is because of this that in the past years we have been exporting avocados to China," said Francisco Contardo, executive director of Chile's Avocado Committee.

"(Chinese) consumers continue to prefer us as they become more knowledgeable about the product and become critical of quality," he said. "The Chinese market is a growing market for avocado consumption and (the product) has high potential."

Between 2009 and 2019, avocado export revenue went from 170.7 million U.S. dollars per year to 300.7 million dollars, according to a report from ProChile, the Chilean export and investment promotion agency.

ProChile said that China is the main Asian buyer of Chilean avocados, and in 2019 the country accounted for 8.3 percent of the overall shipments.

The trade union representative highlighted the participation of the Avocado Committee in previous editions of the China International Import Expo (CIIE), the world's first import-themed national-level expo whose third edition is now being held between Nov. 5 and Nov. 10 in Shanghai, eastern China.

"We participated in the first CIIE and were part of the Chile Booth with a Chilean avocado stand, offering fresh avocado tastings," he said.

In 2020, China continues to lead in imports, accounting for 8.8 percent of Chilean avocado sales, "opening the way to other important destinations on the continent," said ProChile in the report.

Jorge O'Ryan, general director of ProChile, said that "the Chilean avocado has consolidated its presence in large markets and today it is making its way into the countries of Asia."

"We continue working to open the door to new destinations, demonstrating that our food meets the highest quality standards, privileging functionality and safety, with qualities that are increasingly essential for Asian consumers," he added.

According to the Chilean Ministry of Agriculture, the total area of avocado plantations in the country in 2020 is estimated to be 30,143 hectares.