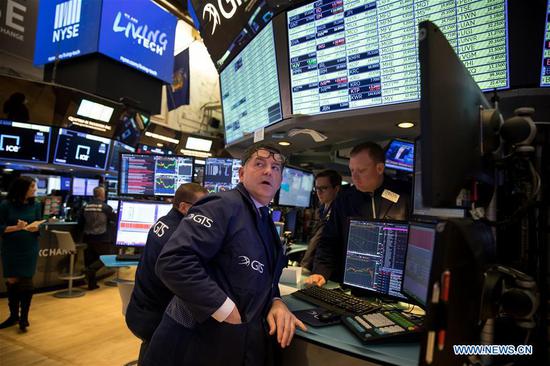 U.S. equities plunged on Monday with the Dow closing down about 3,000 points, as fresh stimulus measures from the Federal Reserve failed to calm markets amid intensifying virus fears.

All the 11 primary S&P 500 sectors ended significantly lower, with the real estate down 16.55 percent, representing the worst-performing group.

The major averages fell to their lows in late session after President Donald Trump said the COVID-19 outbreak could last for months and the U.S. economy could be heading into a recession.

At a White House briefing on Monday, the president also maintained hopeful that the economy would strongly rebound once the outbreak is controlled.

The remarks came after Wall Street kicked off the new week with brutal selling.

Trading was halted for 15 minutes shortly after the opening bell as steep sell-off triggered a circuit breaker. It was the third time that the circuit breaker, or trading halt, has been tipped since last week.

In a surprise announcement, the U.S. Federal Reserve on Sunday cut its benchmark interest rate by a full percentage point to near zero and pledged to boost its bond holdings by at least 700 billion U.S. dollars amid mounting fears over the COVID-19 outbreak.

"Traders are reacting today with shock, as in, 'If they are doing all that, things must be really bad,'" Chris Low, chief economist at FHN Financial, said in a note on Monday.

The Fed's latest move followed Trump's Friday declaration of a national emergency, which has unlocked 50 billion U.S. dollars in federal aid to help combat the spread of COVID-19 across the country.

The Fed and Trump's announcements were part of a broader escalation of the global response to the COVID-19 epidemic, involving both fiscal and monetary policy.

Vicious market swings have become routine for U.S. equities these days over the speed and severity of the coronavirus outbreak.