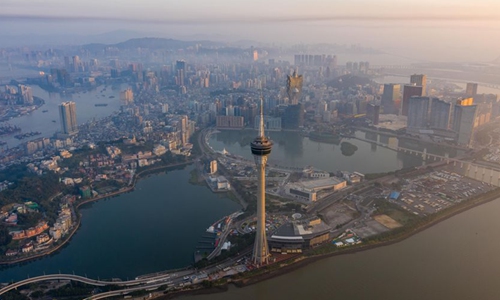 The Chinese mainland and the Macao Special Administrative Region have seen constant progress in exchanges and cooperation since Macao's return to China in December 1999, and the central government will support the diversified development of Macao's industries and further involve the city in the overall national development plan, a senior official said.

Over the past 20 years, to facilitate trade between Macao and the mainland, many efforts have been made to promote and simplify customs procedures, according to a report from the Xinhua News Agency on Monday, citing Wang Lingjun, a vice minister of the General Administration of Customs of China.

Wang said that the mainland customs agency has adopted measures, including filing requirements for breeding plants, in a bid to ensure the safety of food transported to Macao.

Between December 1999 and October this year, the Gongbei Customs inspected and released nearly 1.8 million tons of fresh agricultural products for Macao. The mainland supplies nearly 300 varieties of products to Macao each year, Xinhua said.

Apart from a series of simplified custom measures to facilitate trade, Macao has enjoyed strong support from the mainland, and it has been thriving under the "one country, two systems" principle.

Looking forward, the city is set to play a more significant role in the central government's grand plan of the Guangdong-Hong Kong-Macao Greater Bay Area, which aims to build a global economic and technological powerhouse in southern China that could be on par with bay areas in New York and San Francisco.

The central government will continue to support Macao's role as a core engine in the Greater Bay Area, and strengthen its characteristic industries where it has an advantage, Xinhua reported, citing an official from the National Development and Reform Commission, the country's top economic planner.