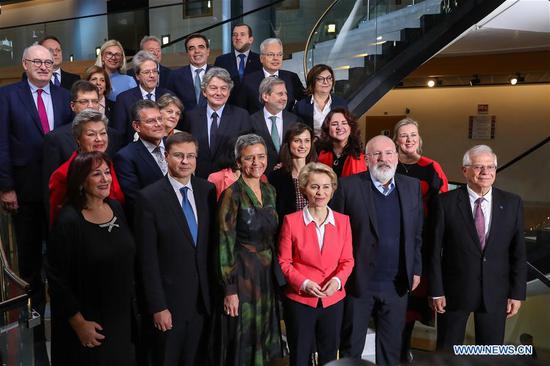 A new European Commission with Germany's Ursula von der Leyen as its first female president was approved by the European Parliament on Wednesday.

The vote -- 461 in favor, 157 against and 89 abstentions -- was unsurprising, since she had already cleared the hurdles with European Union (EU) lawmakers in recent days.

Since being named to the post of president by leaders of the 28 EU member states, von der Leyen's start had been shaky. She struggled through her first vote in the European Parliament, winning by only nine votes in her own confirmation, after which several of her nominations of new European commissioners were defeated by lawmakers, leading to weeks of delay in taking office.

Von der Leyen delivered a speech before the vote on Wednesday, repeating her pledges, such as a geopolitical European Commission, strong actions on climate change and strategic autonomy.

Now the European Council has to approve the Commission by a qualified majority before it takes office on Dec. 1.

"This is an unsettled world, where too many powers only speak the language of confrontation and unilateralism," von der Leyen said, stressing that "the world needs our leadership more than ever."

"Countries from east to west, from south to north, need Europe to be a true partner," she said. "We can be the shapers of a better global order. This is Europe's vocation. And it's what European citizens want."

"My Commission will not be afraid to speak the language of confidence and assertiveness. But we will do it our way, the European way," she said. "This is the geopolitical Commission that I have in mind and that Europe urgently needs."

The term "geopolitical" has become von der Leyen's oft-used term, and it is understood to mean that the bloc will be more active in external affairs.

Strahinja Subotic of the think tank European Policy Center (EPC) wrote in an analysis, saying that the European Commission will increase its focus on external action, while the position of its top diplomat will be strengthened, and the rise of external actors in the western Balkans will be monitored more closely.

In line with the EU's increasing attention on climate change, von der Leyen described it "existential issue for Europe - and for the world."

"How can it not be existential when we see Venice under water, Portugal's forests on fire, or Lithuania's harvests cut by half because of droughts?" she asked, referring to recent events. "This has happened before but never with the same frequency or intensity," she noted.

In July, von der Leyen promised a European Green Deal to EU lawmakers and in Wednesday's speech she again spent considerable time on it, albeit with few new details except statements like "the European Union will mainstream climate financing throughout its budget, but also throughout capital markets and the entire investment chain."

Underlining that the EU only accounts for 9 percent of global emissions, she said other economies must be brought on board, saying from China to Canada, through to California, others are "working with us" on their own Emission Trading Systems.

Von der Leyen underscored that Phil Hogan, the new European Commissioner in charge of trade, "will ensure that our future trade agreements will include a chapter on sustainable development."

While von der Leyen didn't specifically use the term "strategic autonomy" on Wednesday as she did in earlier speeches at the EU legislature, her call to "have mastery and ownership of key technologies in Europe" echoed in effect the current buzzwords in Brussels.

"These include quantum computing, artificial intelligence, blockchain, and critical chip technologies," she said.

Von der Leyen is not shy about the EU's strength, touting "We are the world's trading superpower. We rank first globally in exporting manufactured goods and services. We are the largest source and destination of foreign direct investment anywhere in the world."

"We should harness this transformative power of the twin climate and digital transition to strengthen our own industrial base and innovation potential," she urged.

At a time when Europeans feel its reliance on the United States for security is increasingly fragile, repeated calls for strategic autonomy could be received with mixed feelings in Washington.

"Strategic autonomy has obvious appeal to Europeans at a time of fraying trans-Atlantic bonds and deepening great-power competition," wrote Stewart M. Patrick of the Council on Foreign Relations in the U.S., this week, "Aspiring to self-reliance is one thing, however, achieving it will require much more from the European Union."

"The heterogeneous bloc will have to develop a coherent strategic culture and come to some agreement on a shared assessment of threats -- and on how the EU should pursue its interests and promote its values internationally. Europeans must also reassure the United States that any new EU military capabilities will complement rather than undermine NATO," Patrick wrote.