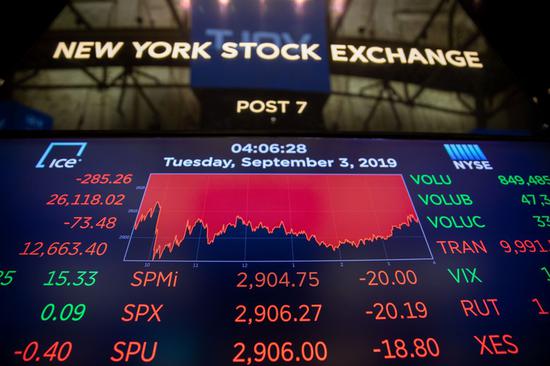 Trade policy uncertainties and weak manufacturing data were the major reasons why U.S. equities suffered a sell-off on Tuesday.

Most of the Dow component companies traded in red territory. Trade bellwether Boeing and Caterpillar dropped 2.66 percent and 1.66 percent, respectively.

Tuesday marked the first trading day after the latest round of tariff hikes between the United States and China took effect on Sept. 1.

China on Monday announced that it had filed a case at the World Trade Organization against the United States following its implementation of the additional 15-percent tariffs imposed on 300 billion U.S. dollars worth of Chinese imports on Sept. 1.

The tariffs imposed by the United States severely violated the consensus reached by the two heads of state in Osaka, a statement released by the Ministry of Commerce said, adding that China is extremely dissatisfied with and resolutely opposes the tariffs.

Also contributed to the downward trend of the equities was the weak U.S. manufacturing data.

A gauge of U.S. manufacturing from the Institute for Supply Management (ISM) showed the sector contracted in August.

The U.S. manufacturing PMI (purchasing managers' index) registered 49.1 percent, a decrease of 2.1 percentage points from the July reading, according to the Manufacturing ISM Report on Business released on Tuesday.

Timothy Fiore, chair of ISM Manufacturing Business Survey Committee, said in a statement that comments from the panel reflect a notable decrease in business confidence. August saw the end of the PMI expansion that spanned 35 months, with steady expansion softening over the last four months.

"Overall, sentiment this month declined and reached its lowest level in 2019," Fiore added.

Andrew Hunter, senior U.S. economist at Capital Economics, said in a note that the weak ISM survey suggested that a combination of weak global demand and escalating trade tensions is taking an increasing toll on U.S. producers.

Hunter noted that the report highlighted that the renewed escalation of trade tensions between the United States and China is starting to weigh more heavily on sentiment.

"That will only reinforce the concerns of Fed officials over the impact of trade uncertainty on the economy, and provides another reason to think that another 25 bp (basis-point) rate cut is coming at the FOMC (Federal Open Market Committee) meeting in two weeks' time," said Hunter.

In the meantime, traders noted that the market reaction was milder than they had expected.

Matthew Cheslock, an equity trader with Virtu Financial, said the market already saw steep sell-offs in the past weeks on the latest round of tariff hikes between the world's top two economies and it had already priced in another rate cut in September. That might be the reason why the market seemed a little immune to the two pieces of news on Tuesday.

He added that there were only sellers and no buyers in the market right now because investors adopted a wait-and-see attitude and will remain so before they could receive clearer and more concrete messages from the U.S. government and the central bank on trade issues and monetary policies.