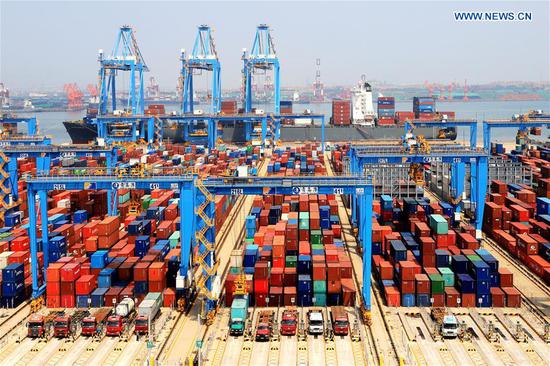 The Standing Committee of the National People's Congress (NPC) on Tuesday started reviewing a new draft of the foreign investment law, the latest move to promote the country's opening-up initiative.

During the two-day session, members of the top legislature are scheduled to deliberate the new version of the draft law, which has been updated from the first draft submitted to the previous session last month.

By the end of October 2018, a total of nearly 950,000 foreign-funded companies had registered in China, bringing in an accumulated investment of over 2.1 trillion U.S. dollars and performing as major driving forces in China's economic and social development.

Li Zhanshu, chairman of the NPC Standing Committee, on Tuesday presided over a plenary meeting during the ongoing session, at which lawmakers were briefed on the amendments.

To better implement the report of the 19th National Congress of the Communist Party of China (CPC) in 2017, the new draft further expanded the article on the system of pre-establishment national treatment plus a negative list, said Li Fei, chairman of the NPC Constitution and Law Committee, while presenting the new draft to lawmakers.

The CPC report noted that "China will not close its door to the world; we will only become more and more open."

The draft is also in line with the amendment to the Constitution, which, adopted by the NPC in March 2018, stipulates that China "pursues a mutually beneficial strategy of opening up."

Definitions of the terms are included in the article, in addition to a clause requiring the state to give national treatment to foreign investments outside the negative list.

It also stipulates that foreign-invested enterprises have equal access to favorable policies for enterprises.

In line with provisions in the Constitution, the new draft proposes that the state shall not expropriate or requisition foreign investment, except under particular circumstances and in the public interest.

If the state expropriates or requisitions foreign investment, "due legal procedures must be followed while prompt, fair and reasonable compensation should be made," it notes.

The new draft also includes regulations regarding antitrust examination on mergers and acquisitions by foreign businesses and penalties on failure to report their investment information to related authorities.

In late December, the original draft was submitted to the NPC Standing Committee for its first reading.

When introducing the draft to lawmakers, Justice Minister Fu Zhenghua said the current laws could hardly catch up with the changing requirements in building a new system of open economy.

"There is an urgent need for such a unified law to provide stronger legal protection for further expanding opening up and better using foreign investment," Fu said.

Du Liming, another lawmaker, proposed to accelerate the legislation work and put the draft to a vote at the upcoming NPC annual session in March.

After the first reading, the draft was distributed to agencies at the central and local governments, a number of institutions of higher learning and research organizations to solicit opinions.

The NPC Standing Committee also published the draft online to seek public comments until Feb. 24. Suggestions from nearly 500 users have been received so far.

All parties agreed to the enactment of the law, saying it is an important step to improve the legal system concerning foreign affairs and will help China attract more foreign investment, open wider to the world and enhance its ease of doing business, according to Li Fei.

Ma Zheng, vice president of the China subsidiary of major agricultural commodities trader Cargill, believes the replacement of the three existing laws governing foreign investment with the unified one is of much significance.

One provision in the draft proposes to use the same contents prescribed in the Company Law and the Partnership Enterprise Law to regulate foreign investment enterprises' organizational form and structure.

With its provisions on better protecting foreign investment, the new law will encourage Cargill to invest more in China, Ma said.

Klaas Steendam, a Dutch national who has lived in northwest China's Qinghai Province for nearly 20 years, said with better policies and a sound legal system, the business environment in Qinghai will be better and more diversified.

Since setting up Amdo Craft, a company doing trade business of Qinghai's handicraft articles, in 2007, Steendam has expanded the company into one with more than 40 sales outlets, 10 of which are overseas.