Xiongan's solution: A vision for the future of cities 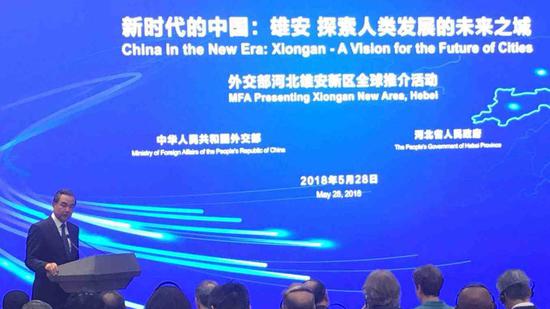 “Xiongan New Area is not a concrete forest; it is a vision for the future of cities,” said Chinese State Councilor and Foreign Minister Wang Yi.

He made the remarks at the Ministry of Foreign Affairs (MFA) Presenting Xiongan New Area on Monday.

He added that the Xiongan New Area is open to the global public bidding, with 18 countries actively participating and gathering 12 batches of international first-class teams.

"In the future, Xiongan New Area will attract more international talents and provide new opportunities for mutual benefit and cooperation between China and other countries," he stressed.

The New Area will include the regions under the administrative jurisdiction of Xiongxian, Rongcheng and Anxin counties (including Baiyangdian Lake), Maozhou, Gougezhuang and Qijianfang townships of Renqiu City and Longhua Township of Gaoyang County, with a planned area of 1,770 square kilometers.

China announced the plan to build a new city 100 kilometers to the south of Beijing on April 1, 2017.

The master plan for the Xiongan New Area was approved this April by the central authorities.

“By the mid-21st century, the Xiongan New area will be built into a high quality and high level modern socialist city in all respects,” he noted.

Xiongan New Area will be built as the people-centered green city. There will be a forest for every resident within 3 km, a greenbelt within 1 km, and a park within 300 m.