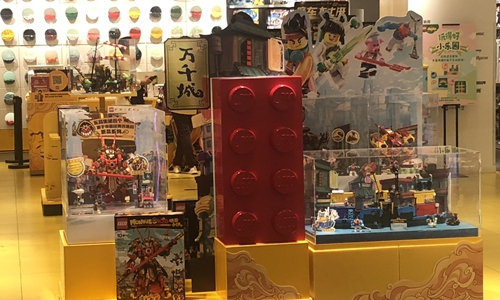 A shop of Lego in Beijing. (Photo: Ji Yuqiao/GT)

Following popular Western film and television works such as Harry Potter and Star Wars, the Monkey King from the classic Chinese novel Journey to the West has become the first Chinese hero to get his own Lego model.

The Lego company launched Monkie Kid, its first series based on Chinese culture, in Shanghai on Friday, Chinese media outlet the Paper reported.

The series created by a Chinese team consists of eight play sets and an animated film. Based on the story of the Monkey King in Journey to the West, the series introduces a new character, Monkie Kid, who is a young noodle shop delivery boy.

The introduction on the company's official website says that Monkie Kid finds himself and his friends entangled in adventures full of actions, mysteries and magic as they fight the Bull Demon King with the help of the Monkey King's goldenbar.

"We chose the story of Journey to the West as it has been recognized by generations of Chinese families and is one of the most popular hero stories in Chinese culture," Lin Haiyun, vice president of the marketing department of Lego in China, told ifeng.com.

After gathering sales data, the staff at Lego found that Chinese elements have been increasingly accepted by consumers in Western countries, which can be seen in the popularity of other artworks.

For example, a group of posters for the BBC's science fiction TV series Doctor Who uses landmark buildings and sites from major Chinese cities such as Beijing, Shanghai and Wuhan as backgrounds.

Disney also launched a group of Chinese-style posters at the beginning of 2020 to celebrate the New Year. Each poster was for a movie such as Mulan, The New Mutants and West Side Story.

The posters are full of traditional Chinese elements from mythology, folk culture to porcelains and architecture in combination with the film's theme. Each poster has a Chinese knot at the bottom.

The international fashion industry is also pursuing Chinese elements. Many fashion brands like Channel and YSL launch cosmetic lines adding elements such as Chinese fans and screens each year.