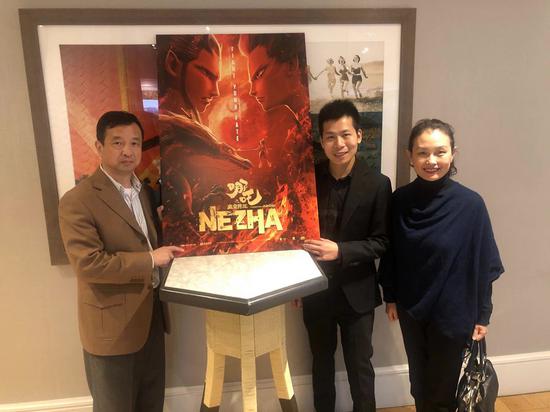 "Ne Zha," adapted from an ancient Chinese myth, is the top-grossing animated film ever made by China and No.2 on the box office chart for all films ever screened on the Chinese mainland. The box office hit has grossed more than 700 million U.S. dollars worldwide.

"Ne Zha" is the brain child of Yang Yu (stage name Jiao Zi), a young pharmacist-turned-animation writer/director, who teamed up with writer/producer, Yi Qiao, CEO of animation shingle Coloroom Pictures, to make a unique and compelling film that has pushed Chinese animation onto the global stage.

"I was surprised and honored that our film was selected. I hadn't expected the audience to be so receptive. Our film broke animation stereotypes and our selection was another kind of a breakthrough," Yi told Xinhua.

The home-grown animation features a popular young hero from ancient Chinese legends and classics such as "Journey to the West." In the story, Ne Zha, born with unique powers, finds himself an outcast that is hated and feared; destined by prophecy to devastate the world, the boy must choose between good and evil to break the shackles of fate and become the hero he wants to be.

Official Oscar screenings are held to enable all Academy of Motion Picture members and other Hollywood guild members, like directors, actors, cinematographers, editors, to be able to see and judge the film for themselves before voting.

The responses of viewers on Wednesday were enthusiastic, with many interviewed saying they would vote for "Ne Zha."

"It was fantastic, superb, crazy over-the-top!" said Arnold Schwartzman, the Academy Award-winning documentarian of, "Genocide," who had started in animation before moving into documentaries.

Pamela Franklin, who serves on the Academy's Foreign Language and Animation committee, concurred, "I really liked it. I've seen a lot of animation, but that was much gentler. This was much more action-oriented and epic."

"It was totally dynamic and fresh," said Michael Peyser, Academy member. "It's taken an essential early myth in Chinese culture and imbued it with the kind of impish humor."

"It was stunningly beautiful and very moving," said Valerie, a Writers Guild of America (WGA) writer. "The storytelling felt Chinese, but it had the 'Cain and Able' conflict between brothers that's universal."

Dee, a member of American Cinema Editors Association balanced her reaction, "It's a very effective film. My one critique is that as a new director he put a little of every style into it. As he develops, he will use his own specific style for each film."

Actress Zhang "Sharon" Shuo told Xinhua, "It's nuanced and clever, melding traditional and new elements very well. Its message is the same thing I learned from studying Tai Chi: you learn you can change your destiny. We have the power within us to do what's good."

Hoda Meisamy, a member of the Costume Designer Guild who studied Taoism at the White Cloud Monastery in Beijing told Xinhua, "What I've learned from Taoism is that you can change your fate by actually being yourself. Don't battle to change yourself, just battle to be the best of who you already are."

Somewhat biographically, director Jiao Zi had to find himself to make it through the hard grind and many hurdles he faced before getting the chance to do his own animated feature.

"In order to pursue your dreams, you must be able to bear a lot of outside pressure and be willing to struggle," he advised.

Glen Chaika, an American animation director who did one of the first Chinese CGI (Computer-generated imagery) movies back in 2002, had high praise for hardworking Chinese animators. He told Xinhua, "Chinese animation has grown so much since I first started teaching there. They love rich textures, extravagant lighting effects, stunning visuals, and this one has it all."

Well Go USA Entertainment released the Mandarin-language film with English and Chinese subtitles in select 3D IMAX theaters across the United States and Canada on Aug. 29, followed by other theaters on Sept. 6.

Chrissy Walker, marketing director of the distributor, hopes that its distinction of being the Academy submission will help Americans wake up to its appeal and the quality of Chinese film.

"We are one of the only companies in the United States that distribute Chinese movies. We want to get the word out so people know about these beautiful films coming from China," she told Xinhua.