From Made in China to Designed in China, world factory turns into fashion trendsetter 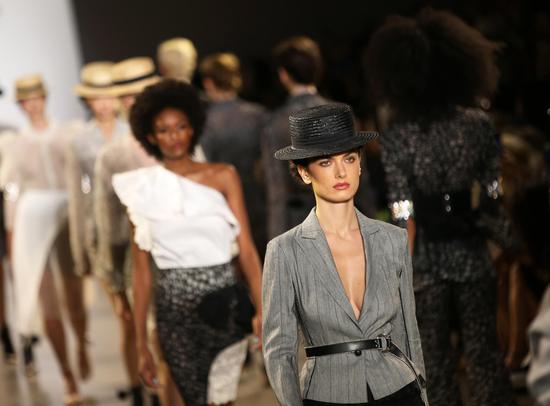 While the bulk of Made in China tags on clothing are increasingly being replaced by such ones as Made in Vietnam and Made in Bangladesh, global runways are increasingly witnessing more Designed in China labels taking center stage.

China, a large economy once dubbed as the world's sweatshop, has turned into an influential global fashion trendsetter, standing for prestige, craftsmanship, integrity and beauty.

This was particularly evident at the recently concluded New York Fashion Week (NYFW), where about one third of the designers that made the official schedule were ethnic Chinese.

Chinese designer Wang Tao feels it's her duty to break the stereotype that clothes from China are poor in quality and lacking in originality.

A frequent participant in the NYFW, she just presented her namesake brand Taoray Wang's latest collection on the runway for the 11th time.

"By bringing Taoray Wang to New York, I want the world to realize that we can be very creative and we really know how to make high-quality production here," said Wang, who pays particular attention to tailoring and fabric selection.

The designer, often hailed as "queen of the suit," is known for her flair for using such basic colors as grey, white and black as well as power tailoring to create elegant and confident looks for career women.

Another stereotype is the necessity to incorporate symbols like the dragon, panda and the color red into Chinese designs. Chinese designers focus more on promoting universal values and expressing their own attitudes rather than selling Chinese culture.

Li Yalan, a young Chinese designer, said she drew inspiration from water for her latest collection because it coincides with the brand's slogan: forget about the boundaries.

Born in southwest China's city of Chengdu, Li is among about a dozen young Chinese designers who have sprung up in the global fashion arena in recent years. She debuted her brand Blancore in New York with 40 looks that incorporated geometric cuts and subtle color palettes with special detail on the neck and waistline to imitate different forms of water like frost, mist and cloud.

Li, in her early 20s, said water is the source of all things and infuses everything with vitality, representing limitless possibility everywhere. She hopes her designs help clients break boundaries and found themselves.

Likewise, Wang has always encourages her customers to express themselves boldly.

"People think smart women can't be too pretty. That's wrong. I want to change that," said Wang, who has sought ways to add a feminine touch to the otherwise rather dull collections of professional looks for career women.

Chinese designers have won recognition from the fashion community.

Blancore opened its first franchise store in Chengdu this year and inked deals with more than 30 showrooms worldwide. The company is now gearing up to opening its first multi-purpose showroom in Lower Manhattan.

The influence of Chinese fashion has fast expanded, reaching larger audiences around the globe as home-grown designers, spending power and fashion aesthetics keep growing, said Chen Xuzhi, a designer who created the label XU ZHI in 2015.

His label, featuring fresh colors and delicate fabric to illustrate a poetic youth, joined two other Chinese brands in presenting their latest collection at the fourth China Day event at the semiannual NYFW.

China Day, first established last year, aims to showcase the works of outstanding Chinese designers and brands, helping them shine on the world stage and enter the U.S. market.

The just-concluded event paid a tribute to the 70th anniversary of the founding of the People's Republic of China and the more than four decades of China's reform and opening up, during which the country's fashion industry grew rapidly.

"They are proactively moving toward automation and smart production through technological innovation, and nurturing indigenous brands to move up the value chain," said Xu Yingxin, the council's vice president.

At an ongoing international fair of the clothing and textile industry in Paris, over 1,100 exhibitors from China brought a rich variety of products ranging from basics to creative high-end fabrics to their partners and customers from around the world.

The rising fashion industry is an epitome of China's fast development over the past few decades.