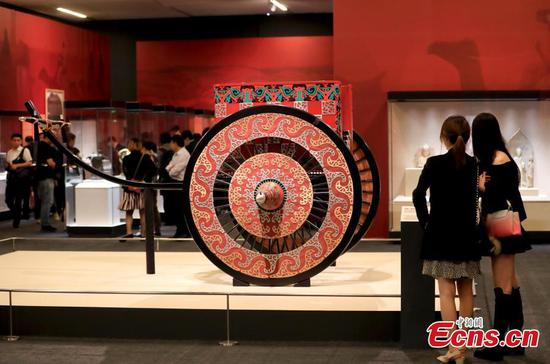 Photo taken on May 13, 2019 shows an exhibition about Asian civilization held at the National Museum of China in Beijing, as part of the Conference on Dialogue of Asian Civilizations (CDAC). The exhibition shows 451 sets of cultural relics from Greece, Egypt, and all 47 countries in Asia. The convening of the CDAC aims at promoting exchanges and mutual learning among civilizations in Asia and the rest of the world, while encouraging these civilizations to achieve common progress. (Photo: China News Service/Du Yang)

An exhibit featuring 451 cultural relics from 47 Asian countries and Greece and Egypt opened on Monday at Beijing's National Museum of China ahead of the Conference on Dialogue of Asian Civilizations (CDAC), which organizers said aims to highlight the time-enduring communication and "harmony in diversity" of different civilizations.

Organized by China's National Cultural Heritage Administration (NCHA) and the Ministry of Culture and Tourism (MCT), the exhibit, with the theme, "The Splendor of Asia: An Exhibit of Asian Civilizations," is part of a series of cultural activities in the run-up to the CDAC starting on May 15 in Beijing.

Among the relics is a religious statue as part of the collection of India's National Museum. Forty-six diplomatic gifts from Asian countries to China are also on display, such as a painting called "Silk Road" sent by Uzbekistan, according to a press release the NCHA provided to the Global Times on Monday.

The exhibit's scale is unprecedented in terms of participating countries, number of relics on display and fineness of the treasures, which can be called an "Olympics of relics," the statement said.

Organizers and Chinese observers lauded the exhibit, which provides rich evidence of how civilizations communicated and learned from each other.

Liu Zheng, a member of the China Cultural Relics Academy, told the Global Times on Monday that ancient relics, carrying the spirit of civilizations, tell people stories of how our ancestors communicated "in a most vivid and convincing fashion."

Greece and Egypt, which represent two ancient civilizations, were also invited to the exhibit, which is a great opportunity for visitors to see the cultures that have close ties with Asia through the ancient Silk Road trading routes, Liu said.

These artworks taught us that "clashing was never the mainstream when civilizations make contact," said Liu. Different civilizations could co-exist and "harmony in diversity" calls for concerted efforts, which will lead to the prosperity of human civilization, he said. The event would not have been possible without the close cooperation of different departments from various countries, Liu said, noting that China's progress in archaeology and relics restoration has won Asian countries' trust to handle their ancient treasures for the special exhibit.

Aside from the exhibit, the Asian civilization week also features cultural events during the CDAC, which include parades, cultural performances, and the Asian Film and TV Week, MCT said on its website.

Liu said the holding of the exhibit in itself is a concrete example of cooperation among Asian countries, especially those along the Belt and Road Initiative on culture protection.

The core values of Asian civilizations displayed in this exhibit, dialogue and mutual learning are also seen in the BRI, a framework for economic and cultural cooperation and exchanges, Liu noted.