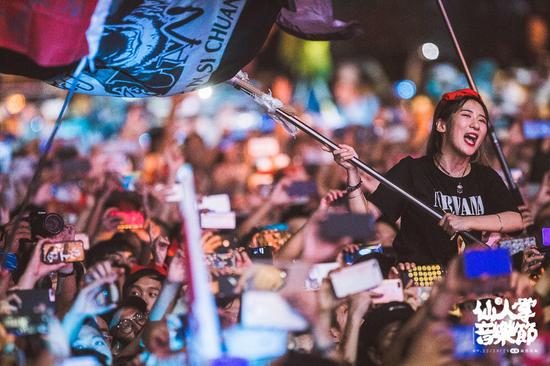 Waving their hands, screaming the lyrics, and hollering their idols' names. More and more Chinese youth are  choosing to spend their holidays in such a passionate and even wild way – going to outdoor music concerts, which are all the rage across China.

According to some industry reports, there were a total of some 270 music festivals across the country in 2017, increasing by about 34 percent from the previous year. The number 10 years ago, however, was just about 20.

Zorro Xu, president of the Xiaofeng Music Group, who organized the Cactus Music Festival in the southwestern Chinese city of Chengdu during the annual Mid-Autumn holiday in September, said this explosive growth reflects a change in people's attitudes towards life.

"Everyone turns to spiritual pursuits as their living standards improve, and I think live music is just one of the most advanced forms of expressing our spirit and soul," Xu told CGTN, adding that he is pleased to see people's growing interest in live music.

As a veteran of China's music industry, Xu has witnessed the evolution of the country's indie music and experienced the growth of the music festival market.

The trend was spearheaded by a few well-known events, such as "Midi," which is dubbed the Chinese "Woodstock," and "Strawberry" initiated by Modern Sky, one of the largest indie record companies in China.

Besides such professional music companies, enterprises of different kinds and local governments are also swarming to the market, taking the popular activity as a marketing strategy for brands, or a way to boost local tourism. Metropolises like Beijing and Shanghai are no longer the only places with vibrant music scenes. Smaller cities now also lure big names to their venues. For music fans, they are pleased with the progress.

"In the past, the music festivals were mainly held in spring and summer, which are available most of the year today. We music lovers have more opportunities to see the singers we like. Personally, I think the more the music festivals, the better," said Zhang Zheming, a music fan from northeastern China's Liaoning Province.

It's not an easy business though. The Beijing Business Today quoted insiders as saying that only about 20 percent of the music fests can make profits due to the huge operational costs. How to attract sponsorship and make the fests distinctive are what concern the organizers.

However, the market continues to heat up. In the coming National Day, a bunch of music parties are ready to entertain the enthusiasts.

For musicians, especially the younger ones, live events serve as a good platform to showcase their works – especially today with the bygone era of CDs and tapes, and Internet success being hit-or-miss.

"I think this is a good trend. In the past, new bands like us would not get so many good opportunities to perform. And I don't think the market is already saturated," Chen Jiabin, the lead singer of the Mr. Well Band, told CGTN.

In fact, the limited performer resources are emerging as a bottleneck to impede the development of the market. With the big shots fully occupied, many fresh events can only invite little-known and inexperienced singers as guests – destined to be a failure.

"I think it will be great if each music festival can be ensured with a high standard. But I will not be interested in badly-organized events,” frequent music festival-goer Qu Lihang said.

Xu said though the market is somewhat chaotic at present, it's a good thing that more players are joining the game, as competition will promote the progress of the industry.

"Ultimately, only those professional ones will win the majority of the fans," said Xu.