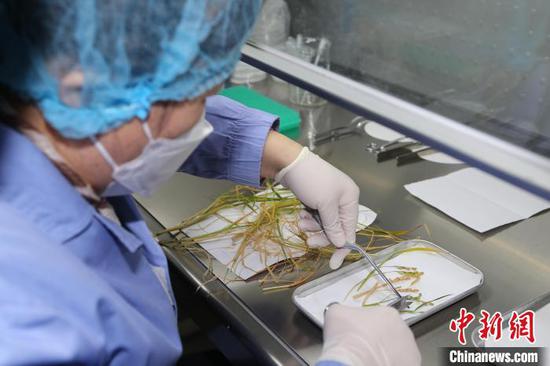 A Chinese Academy of Sciences scientist is analyzing the rice samples returned to Earth. (Photo provided to China News Service)

(ECNS) -- A Chinese research team has yielded rice seeds from 'parent' rice seeds that had germinated, grown and matured after 120 days on a full life cycle in China’s Space Station. This is the first time that seed-to-seed rice breeding was achieved in space, China News Network learned from the Chinese Academy of Sciences on Monday.

The rice seeds, along with seeds of Arabidopsis thaliana, a small flowering plant harvested after a full life cycle in space, returned to Earth with the Shenzhou-14 return capsule on Sunday evening, and were delivered to scientists in Beijing on Monday. The seeds are scheduled to be sent to labs in Shanghai for further analysis.

Three main experiments were completed this time, said Zheng Huiqiong, a researcher at the Center for Excellence in Molecular Plant Sciences under the Chinese Academy of Sciences.

The first is the experiments on rice's full life cycle in space, including germination, seedling growth, head sprouting, and seed set. Images were obtained for analysis.

The second is growing ratooning rice after cutting the stubble of the first crop and yield mature seeds in space. And the third is analysis and sampling on seeds germination, seedling growth and flowering of Arabidopsis thaliana, according to the scientist.

The breeding experiment in space this time has made many significant achievements, which will provide theoretical guidance for space grain production, Zheng said.

The scientists found that rice straws become looser in space, and short-stem rice becomes even shorter, while high rice stem remains the same.

The flowering time of rice in space is slightly more advanced than that on the earth, it was added.

Moreover, the ratooning rice can sprout two ears of rice 20 days after cutting in space, which confirms the possibility of growing ratooning rice in a small closed environment, according to the scientists.