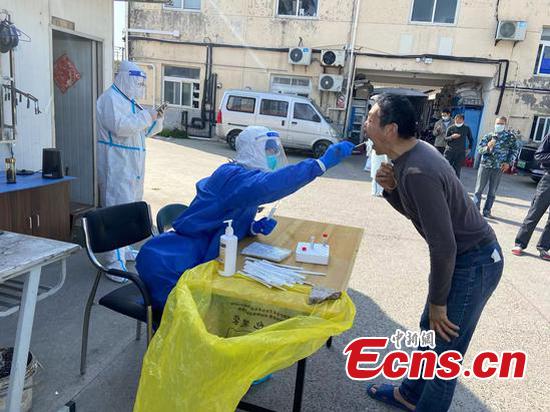 Terasaki Makoto takes a swab sample from a man for COVID-19 nucleic acid test at a community in Shanghai. (Provided by the interviewee)

(ECNS) SHANGHAI -- Terasaki Makoto is a Japanese doctor working at a hospital in Shanghai’s Pudong New District. Every time he goes out to conduct nucleic acid testing in COVID-hit Shanghai, he leaves home early in the morning and comes back late at night.

It has become his routine. He has taken part in over a dozen test samples in the community since the eastern Chinese metropolis stepped up its fight against COVID-19 by introducing citywide mass testing. Dr. Terasaki and his colleagues have visited neighborhoods, construction sites, office buildings, and local households.

For large and densely populated neighborhoods or big companies, a team of medical workers deal with the huge amount of sampling work. For less populated areas within a scattered neighborhood, Dr. Terasaki and his colleagues sometimes do the job single-handedly.

One day, he worked till two in the morning before calling it a day.

The most memorable experience for Dr. Terasaki involved swab sampling at a local village, where an agricultural tricycle took him back and forth between testing sites in the criss-crossed lanes. 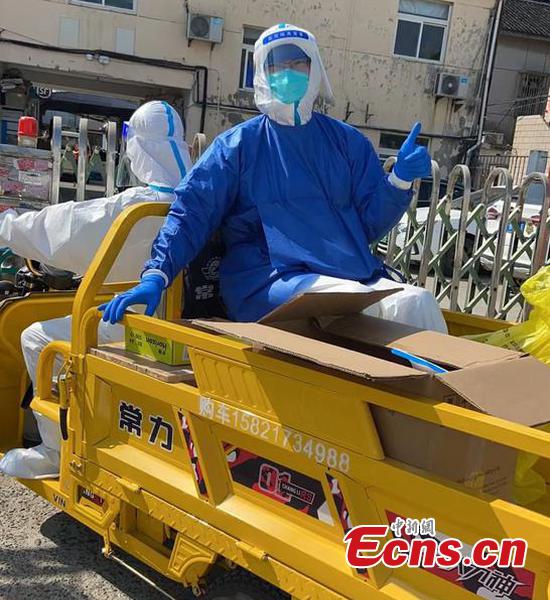 Terasaki Makoto sits on an agricultural tricycle which takes him to different testing sites in Shanghai. (Provided by the interviewee)

"I felt like I was a doctor in a rural area, which was a quite a novel experience,” said Dr. Terasakl.

The Japanese medical professional has also felt respect from the locals who have worked with him.

“At first, I felt sampling to be a boring job. But as a practitioner of traditional Chinese medicine, I learned to look at the work from that perspective,” Dr. Terasaki said.

When conducting tests, he also takes notice of people’s tongues, and considers their health conditions generally.

The Japanese doctor also constantly reminds himself to have patience no matter how busy he is, and to treat people gently, especially the elderly and young children.

While putting his weight behind fighting COVID-19 as a medical worker, Dr. Terasaki has also been touched by others who are working hard on the front line.

“Neighborhood committee personnel, property management staff, medical professionals, police officers, and many volunteers...... they are all making contributions,” he said.

When the pandemic emerged in Shanghai in 2020, Dr. Terasaki, who was in Japan and had stayed for just one day, immediately flew back to the city. Since then Terasaki has not been back to his country for two years. “I want to do my part to bring Shanghai back to normal as soon as possible. I also hope that the pandemic will dissipate soon around the world,” he said.

Another wish of Dr. Terasaki is to go back to Japan with his 10-month- old daughter for a long-awaited family reunion with his mother, so she can finally see her China-born granddaughter. 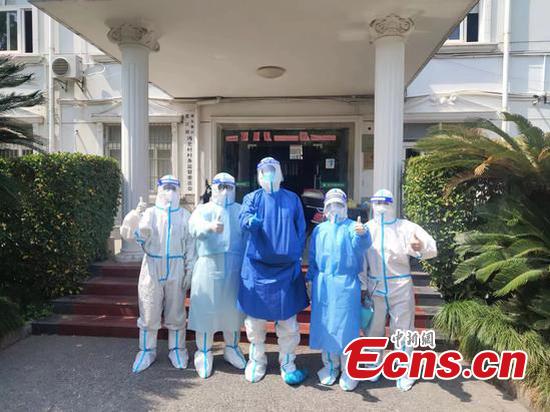 Terasaki Makoto poses for a photo with medical workers and volunteers in Shanghai. (Provided by the interviewee)